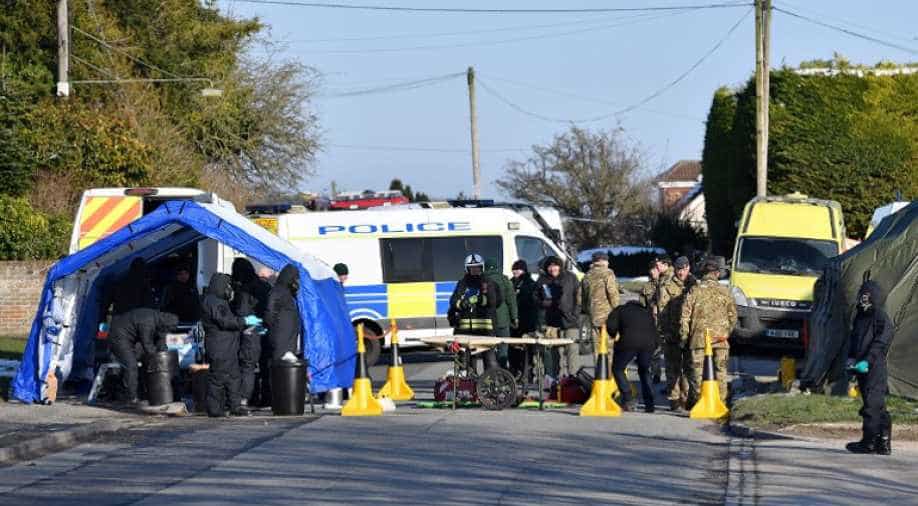 Russia hit back at Britain in the spy poisoning row on Monday, demanding proof of its alleged involvement in a nerve agent attack, as international weapons experts arrived to take samples of the toxic substance.

The March 4 poisoning of former double agent Sergei Skripal, which took place just two weeks ahead of Russia's presidential poll in which Vladimir Putin was re-elected, has plunged relations between London and Moscow into crisis.

As the European Union offered Britain its "unqualified solidarity", the Kremlin demanded London either come up with proof of Russia's involvement -- or apologise.

"Sooner or later these unsubstantiated allegations will have to be answered for: either backed up with the appropriate evidence or apologised for," said Putin's spokesman Dmitry Peskov.

Putin himself on Sunday rejected as "complete drivel, rubbish, nonsense" the allegations by London and its allies that Russia was behind the attack on Skripal and his daughter Yulia in the English city of Salisbury.

British Prime Minister Theresa May on Monday repeated her belief that Russia was responsible.

"They have the capability. This nerve agent was one from a group of Novichoks that were developed by the Soviets," she said while visiting Birmingham.

"Russia has the capability and, I believe, the motive and intent and this is part of a pattern of behaviour we see from Russia across Europe," she said.

Britain has pointed to the 2006 radiation poisoning of former spy and Kremlin critic Alexander Litvinenko in London -- blamed on Moscow -- and Russian activity in Crimea and Ukraine.

Britain, France, Germany and the United States issued a joint statement last week blaming Russia for the attack, the first offensive use of chemical weapons in Europe since World War II.

EU foreign ministers on Monday offered Britain their full support, although sources say some states have been reluctant to put pressure on Moscow over the incident.

"The European Union takes extremely seriously the UK government's assessment that it is highly likely that the Russian Federation is responsible," they said.

The nerve agent attack is expected to be discussed at an EU summit in Brussels starting on Thursday.

Russia's foreign ministry issued a statement Monday saying it was "perplexed by the extreme haste EU members have considered... the British inventions over Russia's involvement in the tragic incident in Salisbury.

"We regret that the EU, by omitting obvious facts and considerations, has once again fallen victim to 'European solidarity' and accumulated anti-Russian reflexes."

Skripal, a former Russian officer who sold secrets to Britain and moved there in a 2010 spy swap, remains in critical condition along with his daughter after they were found unconscious on a park bench.

Investigators from the international Organisation for the Prohibition of Chemical Weapons (OPCW) arrived in Britain on Monday to collect samples of the nerve agent used.

They will meet officials from the Defence Science and Technology Laboratory at Porton Down, where the chemical was identified as the Soviet-designed Novichok.

They will also meet police before sending samples to international laboratories for testing, with results expected to take at least two weeks, according to British officials.

Britain last week announced the expulsion of 23 Russian diplomats, prompting a tit-for-tat response from Moscow. Britain also announced a boycott by members of the royal family and ministers of this summer's World Cup football tournament in Russia.

The US, France and Germany have also called for Russia to fully disclose details of its Novichok programme to the OPCW, a demand also backed by the EU foreign ministers.

French President Emmanuel Macron repeated Monday that Moscow should "shed light on the responsibilities for the unacceptable attack in Salisbury, and to firmly regain control of any programmes that have not been declared" to the OPCW.

But his first direct comments on the incident, after winning a fourth term in Russia's election on Sunday, Putin was defiant.

"We have destroyed all chemical weapons," he said, pledging that Russia was ready to cooperate in the investigation.

On Sunday, Britain's Johnson accused Moscow of stockpiling the nerve agent over the last ten years in violation of the international Chemical Weapons Convention.

But Moscow has suggested that Britain itself may have been the source of the chemical, along with Slovakia, the Czech Republic and Sweden -- who strongly denied it.