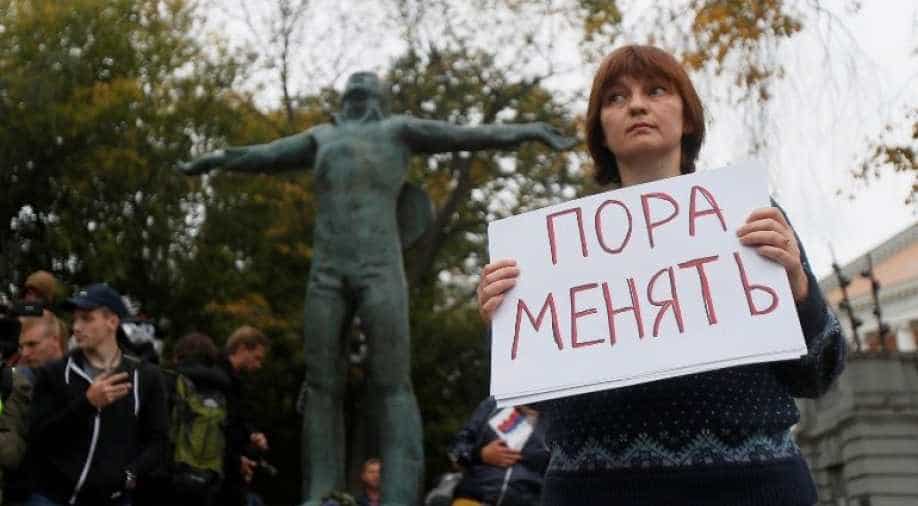 File Photo: A woman takes part in a protest demanding authorities to allow opposition candidates to run in the upcoming local election and release people arrested for participation in opposition rallies, in Moscow, Russia. Photograph:( Reuters )

Protesters mostly young anti-fascist activists chanted 'Revolution' and 'No to dictatorship' and some carried copies of the constitution.

Protesters mostly young anti-fascist activists chanted "Revolution" and "No to dictatorship" and some carried copies of the constitution.

The annual sanctioned march was called to commemorate the memory of lawyer Stanislav Markelov and journalist Anastasia Baburova who were gunned down in Moscow by ultra-nationalists in 2009.

A number of independent local deputies including Yulia Galyamin and opposition-minded Russians joined the march, carrying copies of the constitution and chanting "Putin leave!".

Several people including a protester who carried a placard urging Putin to quit power were detained by police.

The march took place after Putin stunned the nation on Wednesday proposing sweeping amendments to the constitution, the first major changes to the country's basic law since it was adopted under Boris Yeltsin in 1993.

The move triggered the resignation of his government.

Many observers have said Putin's proposals are designed to ensure his grip on power after he leaves the Kremlin and his critics have accused him of orchestrating a "constitutional coup".

Sunday's turnout paled in comparison to the protests of last summer when tens of thousands took to the streets of Moscow to protest against the exclusion of opposition candidates from local elections, leading to wide-scale arrests and long jail terms for a number of demonstrators.

Local deputy Galyamina said it was important to protest against Putin's attempts to cling to power and change the constitution, calling them a "state coup."

Writing on Facebook, she said it was just the "beginning of a civil campaign" of resistance.

But Russia's top opposition leader Alexei Navalny said on Friday he did not support rallies in "defence of the cnstitution".

"The Russian constitution is abominable," he said on Twitter, adding it allowed authorities to usurp power. "No need to protect it."

Observers have said Putin's proposals have caught Kremlin critics off guard and managed to drive a new wedge between members of the Russian opposition.