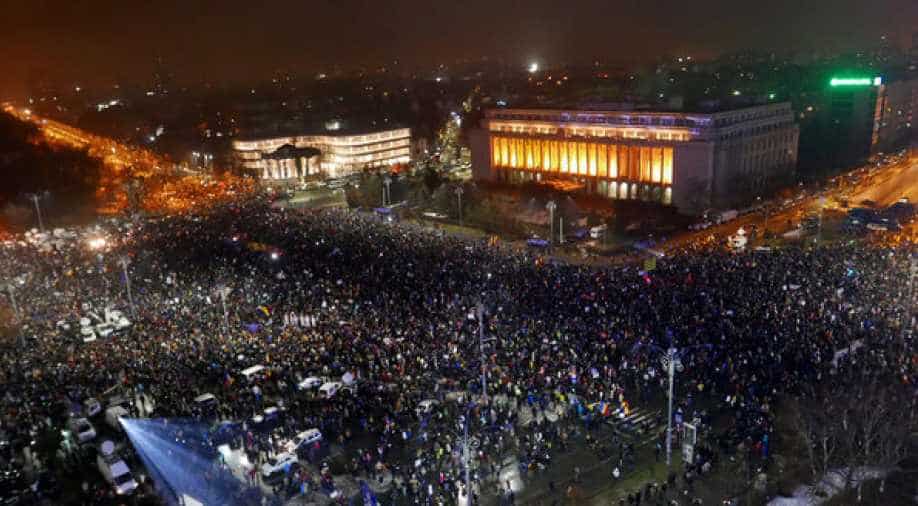 About 12,000 people gathered in front of government offices in central Bucharest on Monday evening. Photograph:( Reuters )

Romania's ruling Social Democrats appealed for calm on Monday after withdrawing a decree widely condemned as reversing the country's anti-corruption drive, but protesters again took to the streets to demand the government's resignation.

On Sunday the government rescinded the decree, which would have shielded dozens of politicians from prosecution, following the largest demonstrations in Romania since the fall of communism in 1989.

About 12,000 people gathered in front of government offices in central Bucharest on Monday evening - far fewer than the 250,000 seen the previous evening - to demand Prime Minister Sorin Grindeanu's resignation and snap elections.

"This government has offered us a perfect demonstration of what it can do during its first 30 days in office. Conclusion: they must leave," said one protester named Franciscus, 30, who works in the banking sector.

A rival demonstration of about 4,000 people gathered for a second day outside the office of President Klaus Iohannis, accusing him of instigating the week-long anti-government rallies.

Iohannis is a former leader of the centre-right opposition who briefly joined an anti-graft rally in late January and has since called a referendum over anti-corruption reforms. He was due to address parliament at 1000 GMT on Tuesday.

"The government has no reason to resign, it was legitimately elected," Dragnea told reporters. "As long as this tense state continues in Romania no one has anything to gain."

He signalled that the government could still seek, with parliamentary involvement, changes to the criminal code, and might seek the advice of foreign experts.

"All the PSD can do is to urge calm. Besides the protesters in the square, there are other Romanians also shouting that their vote must be protected," he said, in reference to the party's big win in a December election.

However, the scenes of Romanians thronging Bucharest's broad boulevards and other cities every evening since Jan. 31 have clearly shaken the PSD, and they will not have gone unnoticed elsewhere across Eastern Europe, blighted by corruption and cosy ties between business and politics since the end of communism.

Romania, a country of 20 million people which hosts a U.S. ballistic missile defence station and is one of Washington's staunchest allies with troops in Iraq and Afghanistan, remains among the poorest, most corrupt members of the European Union.

A Social Democrat-led government was felled by street protests only 15 months ago following a nightclub fire that killed 64 people. That incident triggered an outpouring of public anger amid accusations of state negligence and corruption in failing to enforce fire-safety regulations at the club.

"They (Romania's leaders) are deeply scared by these huge protests, unprecedented in 27 years," independent political commentator Cristian Patrasconiu said of the latest rallies.

"This amounts to more than a simple step back. Any new move by them needs assessment. Everything looks suspicious."

The corruption decree, issued late in the evening of Jan. 31 by the cabinet without parliamentary debate, had been designed to decriminalise a number of graft offences, cut prison terms for others and narrow the definition of conflict-of-interest.

The government said it was merely bringing the criminal code into line with recent rulings by the Constitutional Court and an EU legal directive and also wanted to ease jail overcrowding.

But the opposition, anti-corruption prosecutors, magistrates and hundreds of thousands of Romanian protesters said it had been tailor-made to amnesty dozens of politically-affiliated public officials convicted or accused of abuse of office in one of the most corrupt members of the EU.

The European Commission and the United States both condemned the government's move as backtracking on anti-graft reforms and the widely-acclaimed work of anti-corruption prosecutors.

The government’s decision to withdraw the decree will require the approval of parliament, where the PSD and their junior partners enjoy a big majority.

On Wednesday, the government also faces a no-confidence vote filed by the opposition Liberals and Save Romania Union.