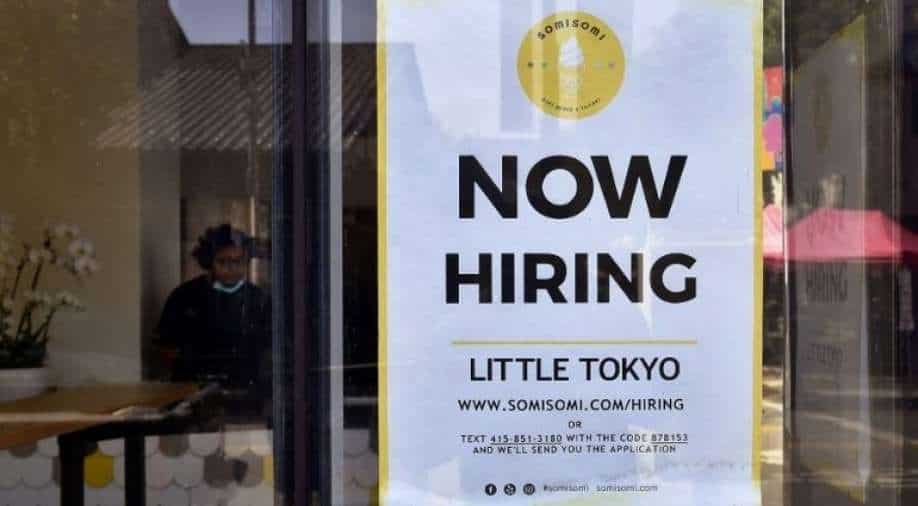 In this file photo taken on May 28, 2021 a 'Now Hiring' sign is posted in front of an ice-cream shop in Los Angeles, California. Photograph:( AFP )

In addition to long-historical employment discrimination, experts say virus-related disruptions have made it hard for many job seekers to find work that they can obtain easily or feel comfortable doing

As vaccines help quell COVID-19 cases, millions of Americans have gone back to work, but fewer Black and Hispanic workers are being rehired, entrenching persistent inequalities in the United States.

The divides are fueled by long-running employment discrimination, experts say, worsened by unique, virus-related disruptions that have left many job seekers unable to find work they can get to, or feel safe doing.

"We haven't actually addressed those underlying power disparities in the economy," said Kate Bahn, director of labour market policy with the Washington Center for Equitable Growth.

After skyrocketing to 14.7 per cent in April 2020 when business restrictions to stop the virus from spreading were at their tightest, the US unemployment rate dropped to 5.9 per cent in June, according to the Labor Department.

But the gains were not shared equally: the jobless rate for Black workers was 9.2 per cent and for Hispanics 7.4 per cent, compared with 5.2 per cent for whites.

The racial and ethnic employment gaps in the world's largest economy were present even when unemployment was at record lows before the pandemic.

In Washington, the issue is receiving renewed attention from President Joe Biden, who has put forth massive spending plans he says will help reshape the economy and make it more inclusive.

"What is surprising, however, is that it's almost six decades later, and the data point has barely changed. It's still 15 percent."

The Federal Reserve has also pledged to keep interest rates low for longer to increase the hiring of racial minorities, something that took nearly a decade following the 2008 global financial crisis.

"We all do better when the pie is bigger, and you get the pie bigger by being aggressive about this," William Spriggs, chief economist of the AFL-CIO trade union federation, told AFP.

The Labor Department is due to release the latest employment report on Friday, which some economists expect will show the economy gaining over one million jobs in July, lowering the unemployment rate to 5.6 per cent as more businesses reopen.

The June data showed unemployment for white women was five per cent, despite losing jobs last year at about the same rate as Black workers, who have seen much slower rehiring. The trend is similar for Hispanics.

"There is a fixed disparity between Blacks and whites in terms of being rehired," Spriggs said.

Scholars blame the disparity on factors that push Black and Hispanic workers into jobs that pay less and often put them most at risk of contracting COVID-19.

Walter L. Simmons, president and CEO of nonprofit Employ Prince George's, which serves a mostly Black and Hispanic county outside Washington, said the ongoing pandemic disruptions are keeping some people from taking jobs, or even looking for work.

Bus and ride-sharing services have not yet returned to normal, meaning many jobseekers often cannot get to work. Childcare also has been curtailed, so working parents have to figure out what to do with their children.

Many people in Prince George's county live with extended family, and may be reluctant to take a job where they risk infection, Simmons said, a fear that has grown more acute as the highly infectious Delta variant spreads.

"Those are three areas we're seeing that nobody really has an answer for. They're just saying come back to work," Simmons said in an interview.

For now, jobless workers are able to survive off of expanded unemployment benefits authorized by the federal government, which pay some low-wage workers more than their previous jobs.

About two dozen states ended these benefits, and in September, they expire nationwide.

Simmons fears what could happen after.

"Those who were struggling prior to the pandemic, they're really going to struggle," he said.