Quad: Potential bulwark against China's increasing activity in the Indo-Pacific 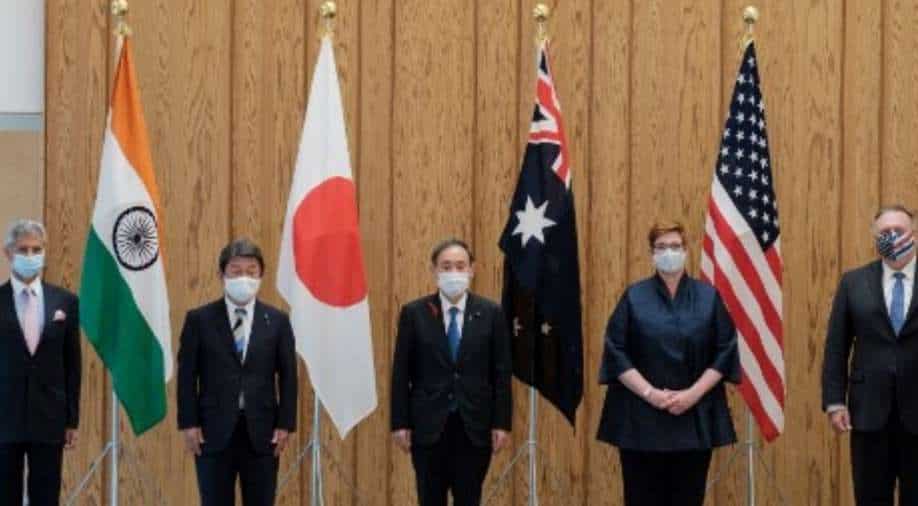 The four nations that make up the so-called Quad group (Quadrilateral Security Dialogue) began their largest joint naval exercises over a decade ago, as part of efforts to balance China's vast military and economic power in the region

India, United States, Japan and Australia are members of the Quad, an informal group that Washington has been promoting to work as a potential bulwark against China's increasing political, commercial and military activity in the Indo-Pacific.

The four nations that make up the so-called Quad group (Quadrilateral Security Dialogue) began their largest joint naval exercises over a decade ago, as part of efforts to balance China's vast military and economic power in the region.

It's an old group with a new life and the members need it, now more than ever.

Japan wants to end Chinese incursions in its waters. To counter China, Suga last month visited Vietnam and Indonesia to bolster ties with key Southeast Asian allies. That followed a meeting in Tokyo of foreign ministers from the "Quad" an informal group of Japan, Australia, the United States, and India.

The grouping makes sense but for it to make a difference it must get its act together, speak in one voice and in a language of strength.

The Quad must be consistent and proactive and not compliant and reactive.

In 2004, a tsunami had devastated the Indian Ocean region and the world was looking to help. Four countries decided to coordinate their response, these include India, the United States, Japan and Australia.

They launched ad hoc operations to provide relief but the engagement was limited. In 2007, the ASEAN regional forum took place in the Philippines, the prime ministers of India, Japan and Australia met with then US Vice President Dick Cheney.

This was the first quadrilateral summit. A few months later, the four countries held a large multilateral naval exercise in the Indian Ocean

Hu Jintao, former president of the People's Republic of China, did not like it and exerted pressure.

China has denounced the Quad as an attempt to contain its development and urged the United States to drop its "Cold War mentality".

For the next 10 years, the Quad lay dormant. But 2017 came as a big turning point as China's Belt and Road initiative was expanding.

Quad member nations saw what China was up to and resurrected the alliance with a meeting. The discussion revolved around a 'free and open Indo-Pacific.

After unleashing the coronavirus pandemic, China emerged as the single biggest threat to the stability of the Indo-Pacific.

Its increasing assertiveness, expanding maritime aggression and bizarre territorial claims has infuriated Quad members and the other countries in the region.

Beijing is currently fighting a trade war with the United States, a diplomatic war with Australia, a border conflict with India and multiple territorial disputes with Japan.

The threat is real and Quad is looking to evolve from an informal grouping into a formal alliance because together it has the potential to counter China's aggression.

China has an army of two million. Meanwhile, the combined army strength of India, United States, Japan and Australia is 2.2 million.

But even though the potential is immense, challenges remain, especially for India, proximity and the lack of a formal alliance are major concerns.

India is the only quad member that shares a border with China and is thus, the most vulnerable to Chinese retaliation.

Unlike Japan and Australia, India does not have a formal security alliance with America.

India sticks to the idea of non-alignment and strategic autonomy, it cannot command the Quad's intervention, should China provoke again.

US President Joe Biden and Indian Prime Minister Narendra Modi agreed in a telephone call to strengthen Indo-Pacific security through the Quad grouping of countries that is seen as a way to push back against China's growing assertiveness in the region.

To be potent and effective, Quad and its members must establish a formal alliance and not wait for another pandemic to join hands.