Putin warns of a new 'arms race' with America 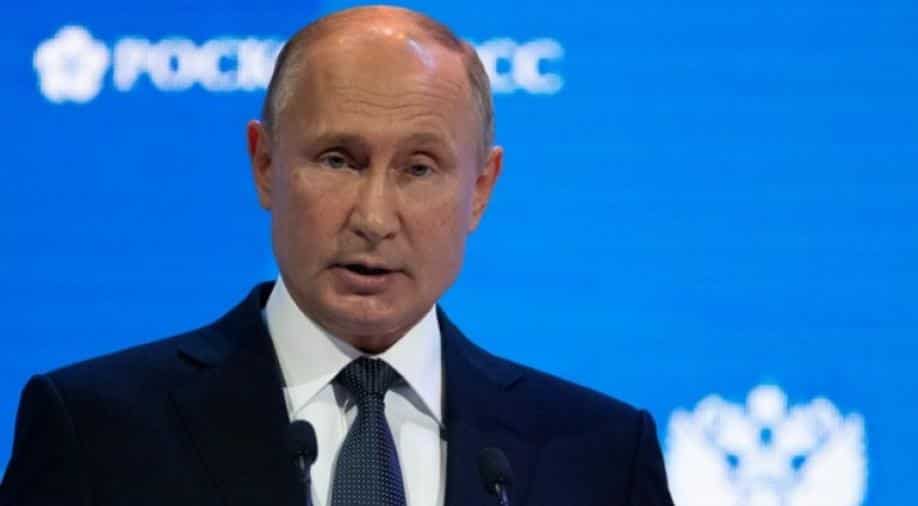 At the weekend, US President Donald Trump sparked concerns globally when he said he would ditch a key Cold War-era nuclear weapons pact, the three-decade-old Intermediate-Range Nuclear Forces Treaty (INF).

President Vladimir Putin warned Wednesday of a new arms race if America pulls out of weapons treaties, and said Russia would respond "in kind" to any new US missiles placed on European soil.

At the weekend, US President Donald Trump sparked concerns globally when he said he would ditch a key Cold War-era nuclear weapons pact, the three-decade-old Intermediate-Range Nuclear Forces Treaty (INF).

Speaking after hosting Trump's national security advisor John Bolton on Tuesday, Putin warned that abandoning the treaty, and failure to extend another key arms control agreement known as the New START, would unleash a new arms race and put Europe in danger.

Putin said dismantling a global arms control system was "very dangerous," adding Russia was concerned about the fact that the United States had already abandoned the Anti-Ballistic Missile treaty, planned to ditch the INF, and that the future of the New START was unclear.

"There would be nothing left except an arms race," he said at a news conference after talks with Italian Prime Minister Giuseppe Conte.

The Russian president said that if Washington moved to abandon the INF and placed more missiles in Europe, Russia would respond "in kind."

"Will we be able to respond?" he said. "Yes, we will and this will be very quick and effective."

Putin said any European countries agreeing to host US missiles would be at risk of a Russian attack.

"These are obvious things," the Russian leader said.

"We will return to the situation with the Pershing missiles in Europe," he said, referring to US missiles stationed in Western Europe in the 1980s.

Putin accused the United States of violating the INF treaty which Trump has said Russia is in breach of.

The Russian president said he wanted to discuss the issue with his American counterpart when they attend a November 11 event in Paris commemorating the centenary of the end of World War I.

"We are ready to work with our American partners without any hysterics," he added.

Italy's Conte said his country was also concerned about a possible collapse of the INF agreement, adding he would speak to Trump on the subject.

"I've already let President Putin know that I was really young in the era of the Pershing missiles and I would not want to return to the time that we have been able to overcome," the 54-year-old said in remarks translated into Russian.

"We should focus on other prospects of cooperation and avoid an escalation that could be alarming for us all."

Trump had said the United States was ready to build up its nuclear arsenal because Russia violated the INF agreement.

"Until people come to their senses, we will build it up," he said Monday, referring to America's nuclear stockpile.

Trump's announcement sparked concern globally, with the European Commission urging the United States and Russia to pursue talks to preserve the treaty, and China calling on Washington to "think twice."

Bolton has said that Britain, Japan, and other countries supported the US position.

Earlier Wednesday, the Kremlin said it was ready to discuss the possibility of a summit between Putin and Trump in Washington next year.

"Undoubtedly (we are) ready," Putin's spokesman Dmitry Peskov told journalists after Bolton reportedly said such a summit was possible.

Peskov said the issue had been "raised" but "so far there is no concrete decision on this."

The US official said the Anti-Ballistic Missile treaty, a key Soviet-era agreement abandoned by George W. Bush, was previously considered a cornerstone of global security, but that the world had remained safe without it.