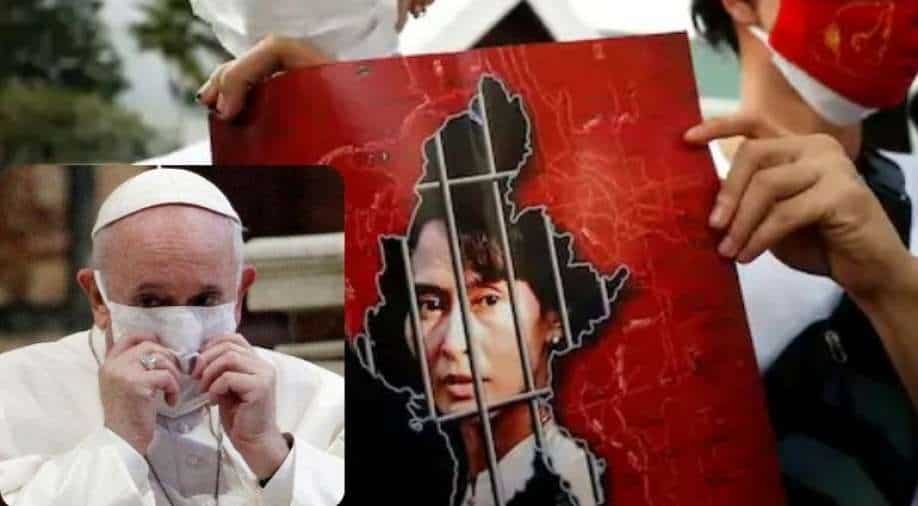 Pope Francis, on Monday, called for Myanmar's political leaders to be 'promptly released'

A few days after the military coup in Myanmar and detainment of several senior leaders, Pope Francis has intervened and urged the Myanmar military to release the detained leaders.

Pope Francis, on Monday, called for Myanmar's political leaders to be "promptly released". He made the request in a speech to ambassadors to the Holy See.

This is the second time the Pope has intervened and spoked about the matter of Myanmar's military coup in the last two days. Before this, on Sunday he had used the recital of the Angelus prayer to express "solidarity with the people" of Myanmar.

"In these days, my thoughts turn particularly to the people of Myanmar, to whom I express my affection and closeness," he said on Monday.

"The path to democracy undertaken in recent years was brusquely interrupted by last week's coup d'etat," Pope Francis said, according to the official translation of his comments.  "This has led to the imprisonment of different political leaders, who I hope will be promptly released as a sign of encouragement for a sincere dialogue aimed at the good of the country," he continued.

Pope Francis had visited Myanmar in 2017 and has since then held the people of the country close to his heart.

Meanwhile, the generals of Myanmar have warned the locals against the ongoing protests in the country where the locals have been taking to the streets to raise their voices against the illegal detainment of the popular leader Aung San Suu Kyi, and nearly a dozen more other senior leaders of the National League for Democracy Party.