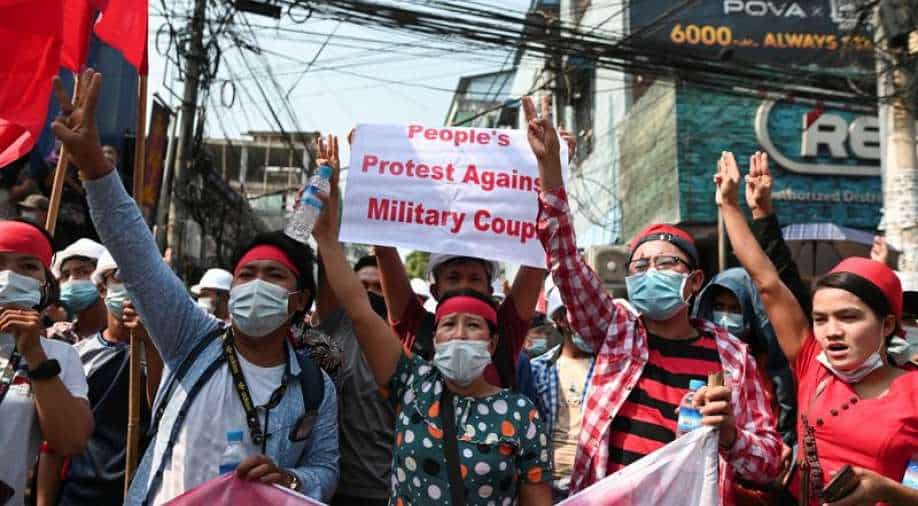 Spirit of the thousands of protesters who have been marching through the streets of Myanmar's biggest city saw an uptick on Sunday with the return of internet services that had been blocked a day earlier.

"Telenor Myanmar has restored the data network nationwide, following instruction from the MoTC [Myanmar Ministry of Transport and Communications]," the firm said in a statement.

Authorities had cut access to the internet as the protests grew Saturday, fanning fears of a complete information blackout. On Sunday afternoon, however, internet users in Yangon reported that data access on their mobile phones had suddenly been restored.

Sunday saw people rallying across Myanmar to denounce last week's coup and demand the release of elected leader Aung San Suu Kyi, in the biggest protests since the 2007 Saffron Revolution that helped lead to democratic reforms.

"We don’t want military dictatorship! We want democracy!" they chanted.

In one of the gatherings, at least 2,000 labour union and student activists and members of the public gathered at a major intersection near Yangon University.

Massive crowds from all corners of Yangon gathered in townships, filling streets as they headed towards the Sule Pagoda at the heart of the city, also a rallying point during the Buddhist monk-led 2007 protests and others in 1988.

A line of armed police with riot shields set up barricades, but did not try to stop the demonstration. Some marchers presented police with flowers as a sign of peace.

Protesters gestured with the three-finger salute that has become a symbol of protest against the coup. Drivers honked their horns and passengers held up photos of Suu Kyi.

An internal note for UN staff estimated that 1,000 people joined a protest in Naypyidaw while there were 60,000 in Yangon alone. Protests were reported in the second city of Mandalay and many towns and even villages across the country of 53 million people that stretches from Indian Ocean islands to the fringes of the Himalayas.

The demonstrations have largely been peaceful, unlike the bloody crackdowns seen in 1998 and 2007.

Suu Kyi, 75, faces charges of illegally importing six walkie-talkies and is being held in police detention for investigation until February 15. Her lawyer said he has not been allowed to see her.

She won the Nobel Peace Prize in 1991 for campaigning for democracy, and spent nearly 15 years under house arrest during decades of struggling to end almost half a century of army rule before the start of a troubled transition to democracy in 2011.

Army commander Min Aung Hlaing carried out the coup on the grounds of fraud in a November 8 election in which Suu Kyi's party won a landslide. The electoral commission dismissed the allegations of malpractice.

The military has accused Suu Kyi and her party of failing to act on its complaints that last November's election was marred by fraud, though the election commission said it had found no evidence to support the claims.