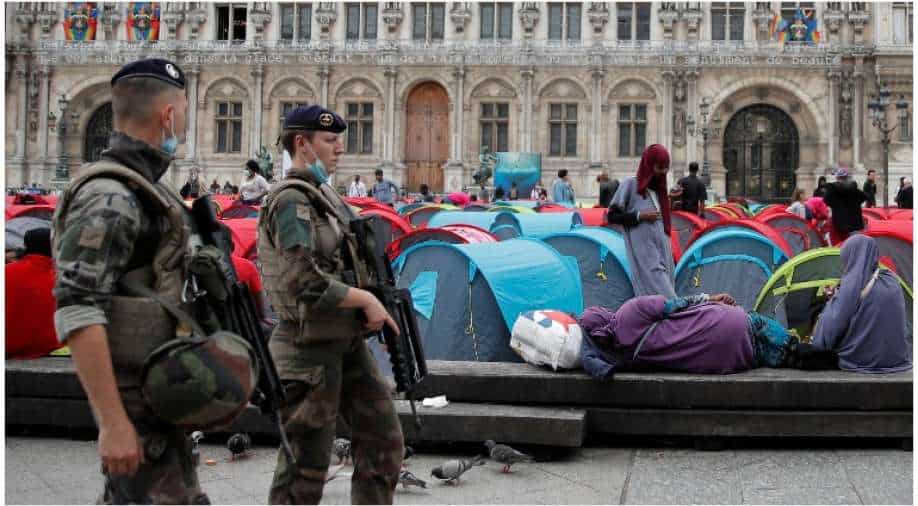 French soldiers walk past tents installed by migrants, their supporters and French association Utopia56 to draw attention to their living conditions and to demand accommodation, in front of the City Hall in Paris, France, June 25, 2021. Photograph:( AFP )

Around 200 tents, mainly red, had been set up Thursday, sheltering 300 people, including children, from sub-Saharan Africa

French police on Friday herded migrants on buses and cleared central Paris. The migrants had been protesting lack of accomodation and had even pitched tents in front of the Paris City Hall.

As the police cleared the crowd, there was no incident. Yann Manzi co-founder of the group Utopia 56 which organised the action, said they would come back if no viable solution is found

"All the persons evacuated stay in touch with us and if they are put back in the street, we'll start again with our actions", Manzi said.

Last year, a similar operation was organised on the Paris City Hall forecourt.

"We have way too many requests which means our accommodation network is saturated ... So we had no choice but to organise a "visibilation" action", Kerill Theurillat, a local leader of Utopia 56 told Reuters before the police cleared the protesters.

Around 200 tents, mainly red, had been set up Thursday, sheltering 300 people, including children, from sub-Saharan Africa.

"I'm living in the street, I have no home, my priority is to have a home and then to go to school", said Cisse Mohamed, an underage refugee sitting in of the tents.

Many refugees have moved to Paris since the closure of a huge migrant camp in Calais in 2016.