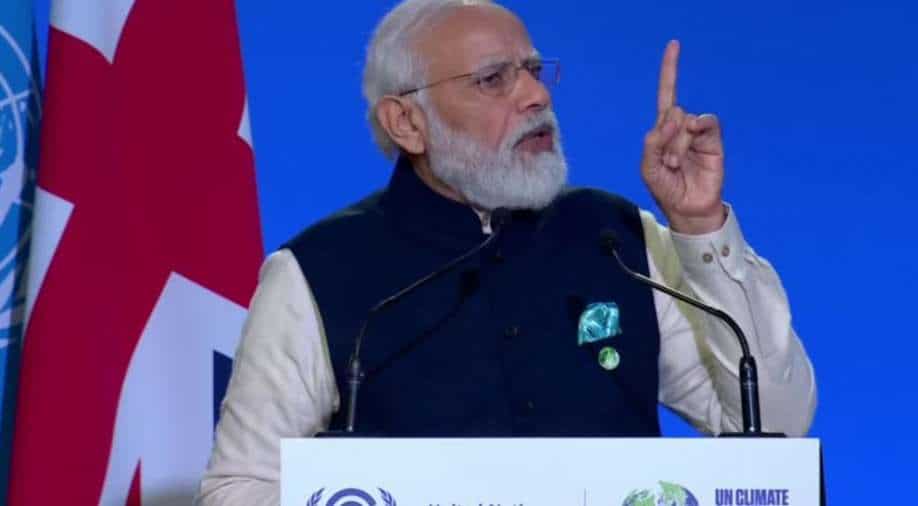 India's Prime Minister Narendra Modi while addressing the UN climate change summit or COP26 said, "a country like India which is 17 per cent of the world population is responsible for less than 5 per cent of emission."

"Today, the entire world admits that India is the only major economy which has delivered on the Paris agreement in letter and spirit," he said.

"By 2070, India will achieve the target of net-zero emissions," PM Modi told leaders at COP26.

India's prime minister said the country is ranked No-4 in installed renewable energy and in the past five years there has been a  25 per cent reduction in fossil fuel.

"For me, the event in Paris was not a summit, it was a sentiment, it was a commitment," he said, adding, "India was not making those promises to the world, but 125 crore Indians, were making them to themselves."

"We know the reality that promises made so far over climate finance have proven to be hollow," India's prime minister pointed out.

"When are taking forward our ambition regarding climate action, the ambitions of the world over climate finance can't keep standing at the point where they were at the time of Paris agreement," he said.

"India Railway has set a target of net-zero emission by 2030," he said.

The @COP26 Summit offers a wonderful opportunity to interact with various world leaders.

In a short while, I will be delivering the National Statement at the Summit. pic.twitter.com/25l4SqnHBH

"At this global brainstorming on climate change, I present five amrit tatva from India. I gift this panchamrit," he said.

"First, India will bring its non-fossil energy capacity to 500 GW by 2030. Second, by 2030 India will fulfil 50 per cent of its energy requirement through renewable energy," he added.

"World today admits that lifestyle has a major role in climate change," he said," he said adding, "this word is life which means lifestyle for the environment. Today, it's needed that all of us come together and take forward life as a movement," he asserted.

"I came with concern for humanity as a representative of a culture that gave the message of Sarve Sukhinah Bhavantu," he explained.

India's prime minister said the country will reduce the total projected carbon emissions by one billion tonnes by 2030 also by 2030, it will reduce the carbon intensity of its economy to less than 45 per cent.

"Today when India has resolved to move forward with a new commitment and new energy, then the climate finance and transfer of low-cost technology transfer has become even more important," PM Modi told the leaders present at the summit.

"Instead of mindless and destructive consumption, mindful and deliberate utilisation is the need of the hour," he said.

India's prime minister informed that the country's Railway has set a target of net-zero emission by 2030.

"It would be an appropriate justice to create pressure on the nations that don't meet their own promises of climate finance," he said while adding, "India expects developed nations to make climate finance of $1 trillion available at the earliest."

"Today it's important to track climate finance just like we track the progress of climate mitigation."

"Climate change is a major threat to existence to many developing countries. We must take major steps to save the world. It is the need of the hour and will prove the relevance of this platform," PM Modi said.

"I'm hopeful that decisions taken in Glasgow will save the future of our next generations," he said.