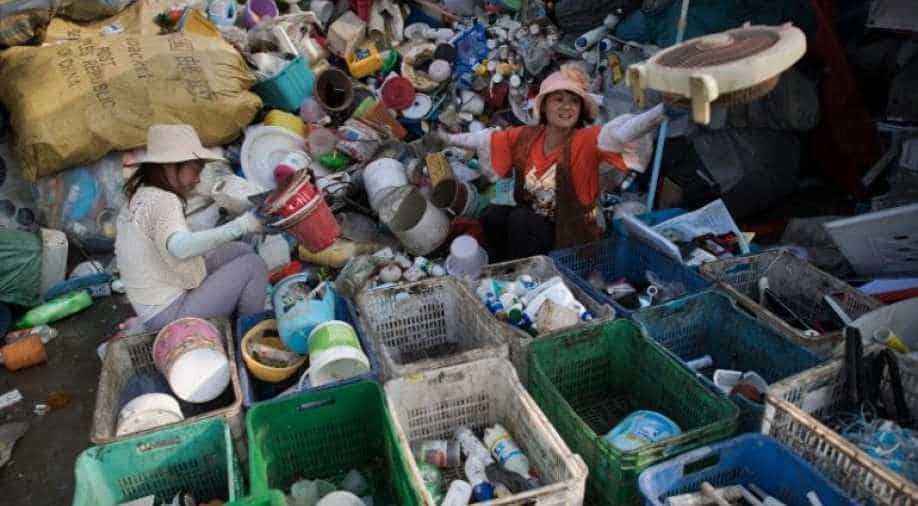 File photo: This file photo taken on May 16, 2018 shows workers sorting out plastic bottles at a waste centre in Beijing. China will ban plastic bags in major cities and single-use straws from restaurants by the end of 2020 in a bid to cut down on waste. Photograph:( Reuters )

China is one of the world's biggest producers of plastic trash. In 2017, China produced 215 million tons of plastics waste.

In a bid to cut down plastic pollution in the country, China, one of the world's biggest producers of plastic waste is going to ban all non-degradable plastic bags and straws in the major cities in its territory.

In 2017, China produced 215 million tons of plastics waste, according to World Bank figures, which warns that by 2030 could soar to 500 million tons annually.

Plastic is everywhere, all of us benefit from it and it touches just about every aspect of our lives. Three hundred million tonnes of plastic waste was generated in 2015.

Also read: Jason Momoa apologises to Chris Pratt after criticising his use of plastic water bottles

Much of the plastic we produce is single-use plastic - used just once before being chucked away.In 2015 it accounted for nearly half of plastic waste generated globally.

And then there’s plastic cutlery, plates straws and bottles. Plastic cotton bud sticks, plastic fast food containers. Not forgetting the plastic in trillions of cigarette filters discarded around the world each year. The list goes on.

The UN says If we carry on consuming at today’s rhythm and current waste management practices stay the same, by 2050 there will be about 12 billion tonnes of plastic litter in landfills and the environment.
And scientists have said that by 2050 there could be more plastic than fish in the world’s oceans.

More than 60 countries and organisations do have various action plan to rein in single-use plastic.

Despite this, it is estimated that between one and five trillion plastic bags are still consumed worldwide each year that’s almost 600 million per hour. If they are tied together, that’s the equivalent of seven times around the Earth.