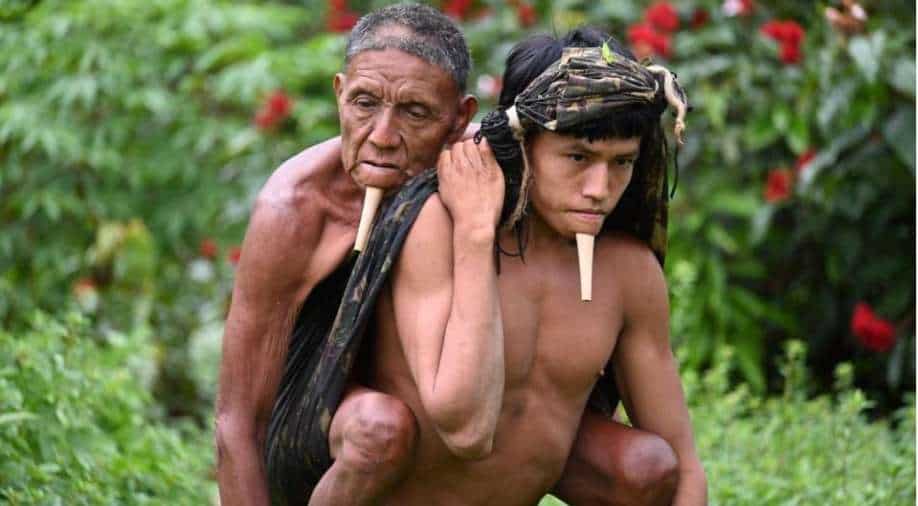 24-year-old Tawy carryied his father Wahu, 67, on back for 6 hours to get a vaccine dose Photograph:( Instagram )

Erik Jennings Simões, the doctor who took the picture, said that Tawy carried his father on his back for five to six hours treading through Amazon forest to vaccine centre

Booking a slot to get Covid vaccine may have become a lenient task for many, but a few still have to overcome complicated logistics challenges in the hopes of getting protection against the deadly virus.

One such incident has come to the fore in which a photo of an indigenous man from Brazil’s Amazon forest carrying his father on his back to a vaccine centre has gone viral.

The photo taken by a doctor shows 24-year-old Tawy holding Wahu, 67, after both were given a vaccine dose.

The photo spread like wildfire on social media with man users hailing the “beautiful relation” between a father and son.

Erik Jennings Simões, the doctor who took the picture, said Wahu could hardly see anything and walked with difficulty because of chronic urinary problems.

He estimated that Tawy carried his father on his back for five to six hours.

“It was a very beautiful demonstration of the lovely relationship between them,” Dr Simões told BBC News Brasil.

The picture was taken in January 2021, at the start of the Covid-19 vaccination campaign in Brazil, one of the world's hardest-hit countries by the pandemic.

But Dr Simões only shared it on Instagram on January 1 of this year to highlight the stark logistics challenges and also to send a “positive message at the beginning of the new year”.

Tawy and Wahu are from the Zo'é indigenous community, which has around 325 members.

They live in relative isolation across dozens of villages in an area equivalent to 1.2 million football fields in the northern Pará state.

Official data say 853 indigenous people have died with COVID-19 in the country.

But indigenous rights groups say that number is much higher. A survey by Apib, a Brazilian NGO, said 1,000 indigenous people had died between March 2020 and March 2021 alone, reports BBC.