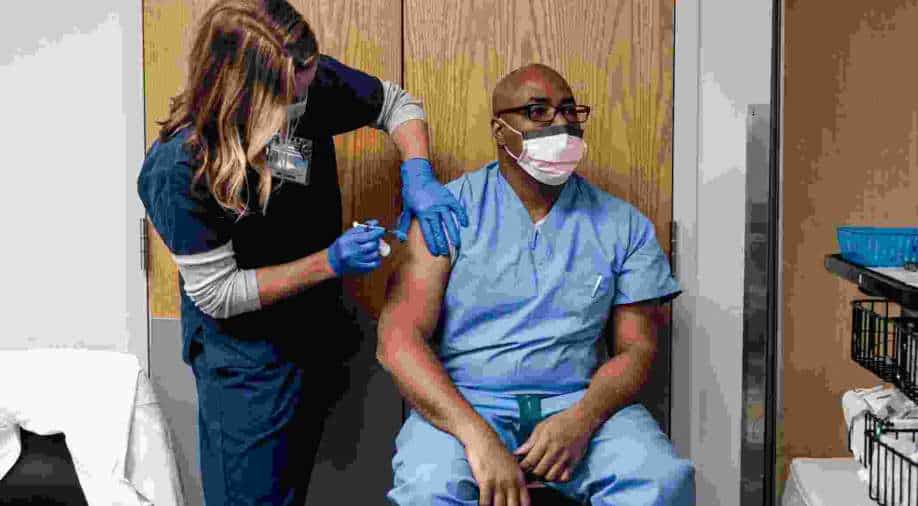 An agreement, which could be announced as early as Wednesday, would help the United States at least partly offset a looming vaccine shortage that could leave as many as 110 million adult Americans uncovered in the first half of 2021.

The Trump administration and Pfizer are close to a deal under which the pharmaceutical company would bolster supply of its coronavirus vaccine for the United States by at least tens of millions of doses next year in exchange for a government directive giving it better access to manufacturing supplies, people familiar with the discussions said.

An agreement, which could be announced as early as Wednesday, would help the United States at least partly offset a looming vaccine shortage that could leave as many as 110 million adult Americans uncovered in the first half of 2021.

So far, only two pharmaceutical companies — Pfizer and Moderna — have won federal authorization for emergency distribution of COVID-19 vaccines, and most of what they are capable of producing for the next six months has already been allocated through contracts with the United States and other governments.

In the negotiations, the government is asking for 100 million additional doses from Pfizer from April through June. The company has signaled that it should be able to produce at least 70 million, and perhaps more, if it can get more access to supplies and raw materials.

To help Pfizer, the deal calls for the government to invoke the Defense Production Act to give the company better access to roughly nine specialized products it needs to make the vaccine. One person familiar with the list said it included lipids, the oily molecules in which the genetic material that is used in both the Moderna and Pfizer vaccines is encased.

Pfizer first started asking for the government’s help in obtaining supplies as early as September and has been unhappy about the lack of response, according to documents reviewed by The New York Times.

Moderna and other companies that worked more closely than Pfizer with the administration through its Operation Warp Speed to develop their vaccines already receive favored treatment from suppliers, putting Pfizer at a disadvantage. That includes two companies — Sanofi and Novavax — that have yet to begin large-scale clinical trials in the United States.

Pfizer and the administration have been negotiating for more doses from Pfizer for more than a month. But a host of other issues have stood in the way of a deal, including Pfizer’s commitments to other nations that moved faster than the United States to lock in a big supply, according to people familiar with the situation.

Pfizer already has a federal contract, signed in July, to deliver 100 million doses of its vaccine by the end of March. Moderna has the same agreement, and has also pledged to sell the government 100 million more doses in the second quarter of the year, from the start of April to the end of June.

Because the Pfizer and the Moderna vaccine both require two doses, that supply would cover only 150 million Americans out of the roughly 260 million who are eligible at the moment to be vaccinated. (Moderna’s vaccine is now restricted to those 18 and over, and Pfizer’s is limited to those 16 and over.)

If Pfizer provides another 100 million doses, that would leave about 60 million eligible Americans uncovered in the first half of the year. Other producers could also cover the shortfall should their vaccines prove successful.

It is not clear how many more doses Pfizer can quickly produce even if the administration uses the Defense Production Act to clear away supply obstacles. One person familiar with the situation said the firm may only be able to deliver 70 million by the end of June, even with better access to supplies.

Had the government agreed to prioritize its supply needs earlier, one person familiar with Pfizer’s situation said, the company might be better positioned now to fully meet the demands. Documents reviewed by The Times showed that Pfizer officials began asking Gen. Gustave F. Perna, the chief operating officer of Operation Warp Speed, in September for help with supplies and brought up the issue repeatedly in weekly meetings.

A senior Trump administration official said the government was unwilling to intervene because Pfizer refused to promise that it would use those materials to produce vaccines solely for Americans.

“It’s our obligation under that type of priority rating to make sure that assets are used only for U.S. sales or production,” the official said, “and they weren’t willing to do that.”

People knowledgeable about the talks said Perna had raised a different concern with Pfizer, saying the government wanted to protect its investment in the other companies under Warp Speed’s umbrella, so it did not want to grant Pfizer the same priority with supplies.

According to a report last month by the Government Accountability Office, the Defense Production Act gives the federal government vast authority over private companies, including the power to prevent supplies from being diverted to a different purpose or products from being sold overseas. The administration has granted the kind of status that Pfizer has been seeking to multiple contractors for medical supplies since the pandemic began, including companies that produce ventilators and N95 respirators, the report states.

Because the Pfizer vaccine, developed with the German company BioNTech, is one of only two that the Food and Drug Administration has approved for emergency use, the company has had leverage in negotiating the new contract.

That advantage could erode if other vaccines are authorized. A third firm, Johnson &amp; Johnson, is expected to announce results from its clinical trials next month. A fourth, AstraZeneca, has announced some interim results, but it has yet to fully enroll its trial in the United States.

With infections, hospitalizations and deaths surging to record levels from a pandemic that has already killed more than 320,000 Americans, the pressure on Pfizer and the government to come to terms is growing.

“The last thing we want is for this to turn acrimonious,” said Dr. Walid F. Gellad, who leads the Center for Pharmaceutical Policy and Prescribing at the University of Pittsburgh. “This kind of corrosive back-and-forth is not helping the public feel any better about what’s going to happen in the future.”

Pfizer’s relationship with the administration has been tense for months. After he lost the election in November, President Donald Trump accused Pfizer of deliberately slow-walking federal approval of its vaccine to hurt him politically.

Alex Azar, the secretary of health and human services, and his aides have complained that Pfizer has kept the government at arm’s length, has faced production problems and has sometimes been uncooperative in negotiations.

Another snag in the relationship surfaced Friday when a European official released on Twitter — and then quickly deleted — a price list showing that vaccine shipments to the U.S. government cost a third more per dose than shipments to European customers.

Pfizer completed a deal last month to sell the European Union 200 million doses at a cost of $14.50 each. The contract signed by the Trump administration with Pfizer in July for the original 100 million doses put the price at $19.50

It is unclear how much the United States would pay if Pfizer and the federal government struck a new deal. In a statement, Pfizer said only that the EU’s order was its largest to date, and that Pfizer and BioNTech “are using a tiered pricing formula based on volume and delivery dates.” It declined to disclose further details of the agreement.

Pfizer executives have been frustrated because, according to people familiar with the negotiations, they repeatedly urged the federal government this summer and fall to lock in more doses early, before other nations snapped them up. Administration officials declined, later saying that Pfizer refused to commit to specific dates when it would deliver them.

The pharmaceutical firm has struggled to navigate the politics of the situation. Pfizer’s chief executive, Dr. Albert Bourla, repeatedly suggested that the firm would know if its vaccine worked by October. Trump, who saw a vaccine breakthrough as crucial to his reelection chances, initially praised Bourla as a “great guy” — then blamed the firm for his loss when the results were released after Election Day.

At the same time, the president and his top aides have claimed credit for Pfizer’s success, even though, unlike the other five vaccine makers in the Operation Warp Speed program, Pfizer did not take federal subsidies for the vaccine development or manufacturing, assuming all of the risk itself.

Pfizer has also vacillated in describing its relationship with the federal government. A top Pfizer official at one point stated that “we were never part of Operation Warp Speed,” then the company backtracked and acknowledged the firm was.

Azar alluded to the friction with Pfizer in an interview last week with CNBC, saying the federal government was willing to help Pfizer manufacture more “if they are willing to take our help.” He added, “I do wish we would just stop talking about this Pfizer thing.”

He denied that there was any threat of a vaccine shortage, saying the government had commitments for three times as many doses as it has now ordered for the first half of next year. Azar’s total appears to include either doses of vaccines that have not yet been shown to work or doses described in contract options that are not set in stone and include no firm date of delivery, or both.