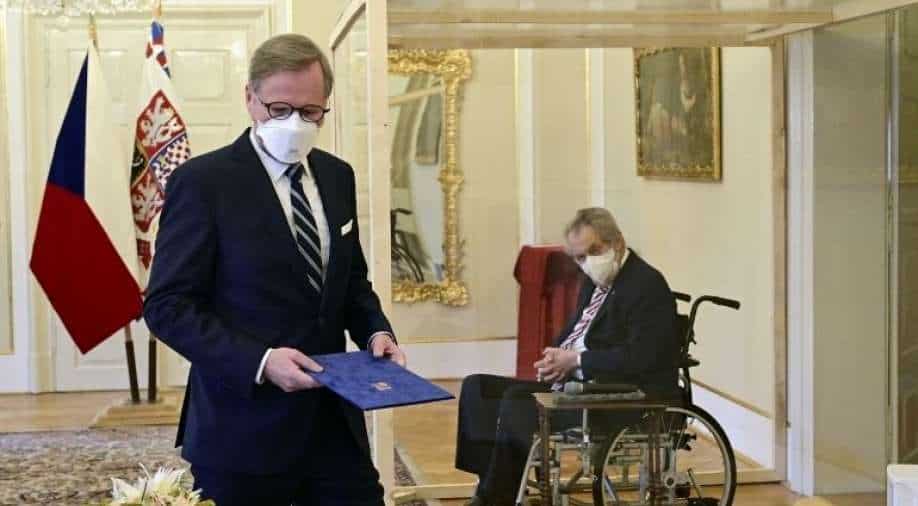 Fiala, a bearded, bespectacled former political scientist, will face the urgent task of grappling with one of the world's highest Covid infection rates including a case of the new Omicron variant

Right-winger Petr Fiala was named the Czech Republic's new prime minister on Sunday in an unusual ceremony, with wheelchair-bound President Milos Zeman speaking from behind a plastic barrier because he has Covid-19.

Fiala, a bearded, bespectacled former political scientist, will face the urgent task of grappling with one of the world's highest Covid infection rates including a case of the new Omicron variant.

"I am convinced we will soon have a strong and stable government," Fiala said at the ceremony.

Zeman said he aimed to wrap up meetings with possible ministers by December 13 "and we can then prepare the appointment of the government".

Fiala teamed up his Civic Democratic Party with two smaller parties to form the Together alliance which came first in last month's general election.

The alliance has since forged a coalition with two centrist parties, the Mayors and Independents, and the Pirate Party, to secure a majority of 108 votes in the 200-seat parliament.

The five parties have agreed on the composition of the future government and on a policy statement.

Post-election talks were held without the 77-year-old president, who was taken to hospital by ambulance on October 10, a day after the election, to be treated for liver problems.

Zeman, a left-winger with a soft spot for Russia and China, had originally been expected to name Fiala as prime minister on Friday, a day after he was released from Prague's military hospital.

But he was rushed back to hospital on the same day after testing positive for Covid.

Zeman was discharged again on Saturday.

Under the Czech constitution, Zeman also has to name the government.

Fiala has said Zeman should name the government by mid-December as the EU member of 10.7 million people is grappling with record daily Covid-19 infections.

The surge led the outgoing government to announce new restrictions on Thursday, including the closure of restaurants, bars and discos at night, as well as all Christmas markets.

But observers say stricter measures may be needed.

Hospitals in the east are running out of capacity and some have begun to move patients to less congested facilities elsewhere in the country.

The Czech Republic is also struggling with unprecedented growth in energy prices and soaring inflation, which have thrown many people into uncertainty before Christmas.