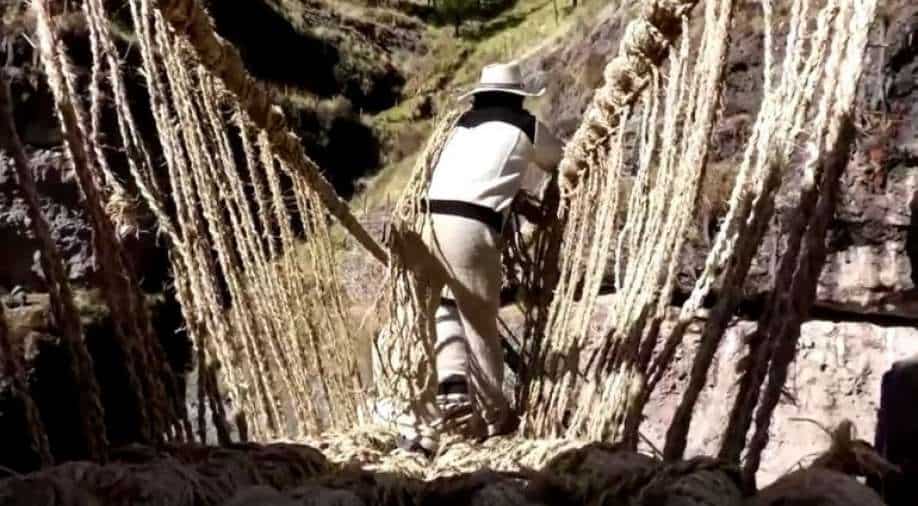 Members of the Huinchiri community in the Canas province of Cusco, Peru, are rebuilding an Incan hanging bridge known as the Qeswachaka bridge, using traditional weaving techniques.

The bridge has been used for over 500 years to connect communities divided by the Apurimac river. But during the COVID-19 pandemic the bridge did not receive any maintenance and in March of 2021 the Qeswachaka fell.

Members of the affected communities, such as the Huinchiri, decided to rebuild the bridge in the traditional Incan style: by weaving it. According to the Andina Peruvian News Agency, the bridge is 33 meters (108 feet) long and 1.20 meters (3.9 feet) wide.

"The Qeswachaka, this Incan living bridge is really an expression and cultural manifestation. This is community", said the Cusco Regional Governor Jean Paul Benavente.

In 2013, UNESCO recognized the knowledge and rituals associated to the annual reconstruction of the Qeswachaka bridge as Intangible Cultural Heritage of Humanity.

Peru is a country rich in ancient treasure. It has hundreds of sites that date back thousands of years and span dozens of cultures, including the ancient Incan empire that was in power when Spanish explorers arrived in the early 1500s.