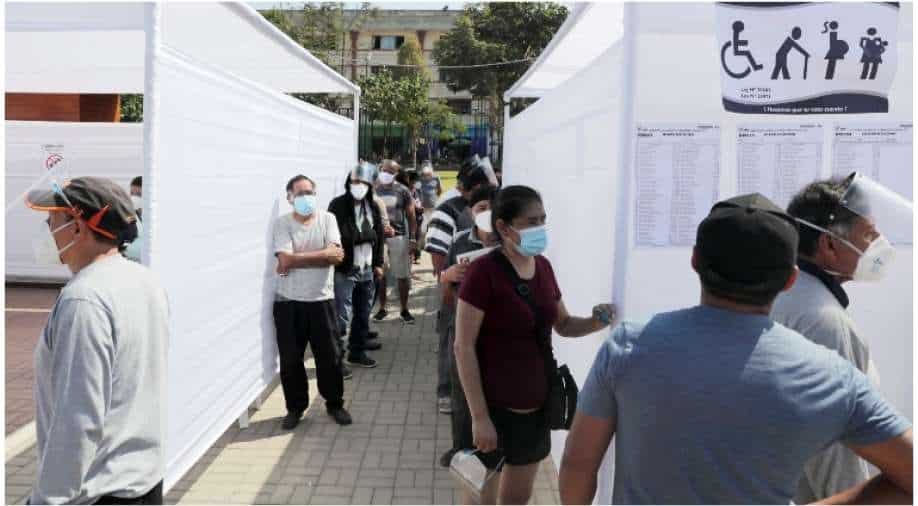 "Today begins the real battle to end the great inequalities that the country has," the candidate told thousands of supporters from the balcony of his party headquarters.

Peru's leftist presidential hopeful Pedro Castillo sought Tuesday to defend his narrow lead in the elections that his rightwing rival Keiko Fujimori is disputing as she fights to avoid an imminent corruption trial.

Castillo, who has rejected calls for the deeply divisive June 6 vote to be annulled, held a rally in Lima Tuesday night where he called on the country's election jury to "once and for all, stop dragging on and keeping the Peruvian people in anxiety, and to respect the popular will of this country."

"Today begins the real battle to end the great inequalities that the country has," the candidate told thousands of supporters from the balcony of his party headquarters.

Earlier, he insisted he was "patiently awaiting a result" even as Fujimori claimed fraud and her backers called for fresh elections.

Peruvians voted last Sunday for their fifth president in three years after a series of crises and corruption scandals saw three different leaders in office in a single week last November.

With 100 percent of ballots now counted, rural school teacher Castillo, 51, was leading by just over 44,000 votes, or 50.12 percent to Fujimori's 49.87 percent, according to the ONPE election body.

But Fujimori has asked Peru's JNE election jury -- which calls the final winner -- to annul tens of thousands of ballots, possibly flipping the balance in her favor.

The JNE's review of the votes she has challenged started last week. All eyes are now on this tribunal.

Observers from the Organization of American States have declared the ballot free and with no "serious irregularities."

On Monday, lawmaker and retired admiral Jorge Montoya, a Fujimori backer, called for "new elections" to be held. With 63 other retired generals and admirals, he questioned the fairness of the vote -- prompting Peru's defense ministry to stress the group "does not represent the Armed Forces."

Fujimori adviser Fernando Rospigliosi told AFP: "I do not know if it is legally possible to annul the elections, but every day there is evidence of manipulation of electoral records and a series of irregularities."

Supporters of Fujimori have been protesting outside the offices of the ONPE, which organized the election and the count, and the JNE, which rules on disputed votes.

"With the call for new elections they are trying to generate violence," Castillo's running mate for vice president Dina Boluarte said at Tuesday's press conference.

Peruvian Cardinal Pedro Barreto, meanwhile, urged people to respect the rules of democracy and said the Catholic Church would be available to mediate between the two parties once a winner is announced.

"It is understandable that we are frustrated, bewildered and that political uncertainty is wreaking havoc in our daily lives, but we must respect the deadlines," he told the RPP broadcaster, adding: "We cannot force or advance processes."

For analyst Hugo Otero, it appeared that rightwing groups fearful of a Fujimori defeat were plotting to have Montoya appointed in her stead.

And Lucia Dammert, a Peruvian academic who lives in Chile, tweeted: "A coup attempt is being organized in Peru to prevent the people's choice from being implemented. A group, mainly from Lima, has created a narrative that is harmful to the country and its weak democracy."

On Monday, UN rights chief Michelle Bachelet expressed concern over rising tension in Peru in the aftermath of the election, and urged all parties to "remain calm."

For Fujimori, the stakes are more than mere power.

Unless she wins, she faces a trial on corruption charges that would otherwise be delayed until after her presidential term.

Prosecutors have said they would seek a 30-year jail term for Fujimori on charges of taking money from scandal-tainted Brazilian construction giant Odebrecht to fund failed presidential bids in 2011 and 2016.

Fujimori, who has already spent 16 months in pre-trial detention, denies the allegations.