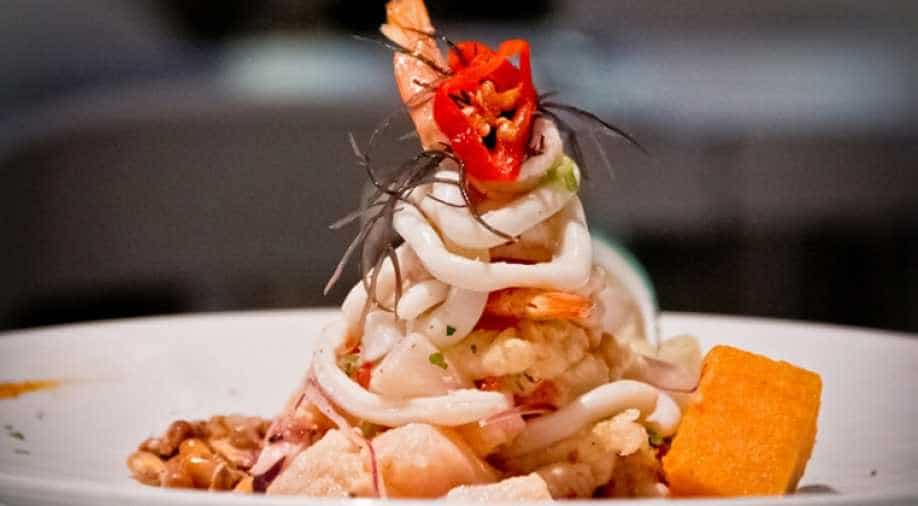 Following a drawn-out process involving experts and representatives across several sectors, Peru decided to submit the tangy dish that uses the freshest of fish as its main ingredient in a bid to secure the prestigious status.

Peru's cuisine, renowned for being exquisitely diverse, fresh and punchy with its flavours, has championed ceviche — fresh raw fish cured in lime juice, onions, salt and yellow chili peppers— from a catalog of some 3,000 national dishes in its bid to secure intangible world cultural heritage status from Unesco after a failed attempt in 2010.

Following a drawn-out process involving experts and representatives across several sectors, Peru decided to submit the tangy dish that uses the freshest of fish as its main ingredient in a bid to secure the prestigious status.

"The error was that (in the previous 2010 application) the history of Peruvian cuisine and all regions were included," Mariano Valderrama, former representative of the Peruvian Gastronomical Association (APEGA) and an expert on ceviche told EFE.

"But that isn't the line Unesco follows if we take a look at how Mexico achieved its status in 2010 with Michoacán food being recognized as a paradigm of Mexican cuisine," Valderrama said in reference to the rustic and hearty food from the central Mexican state also know as the "soul of Mexico."

Soledad Mujica, director for intangible cultural heritage at Peru's Culture Ministry told EFE that the 2010 application did not meet the criteria that Unesco sets in order to achieve world heritage status.

"Unesco requires, as a first step, a clear definition of what is being tendered to be considered intangible cultural heritage, in order to then define how it meets the standards from a cultural point of view taking into consideration traditions, customs and wisdom," Mujica added.

It is a very complex application process and the endeavour to include the entirety of Peruvian cuisine in the tender was impossible given the word limit, she continued.

So the choice to champion ceviche relied on the fact that it is "a dish that is anchored in the Peruvian psyche, in the mountains, by the sea and in the jungle," the civil servant said adding that it represented the diversity of the nation with communities using either fresh-water fish or seafood depending on their location pairing it with various side dishes such as sweet potato, corn on the cob, "zarandaja," (a type of pulse) and yuca (a starchy tuberous root from the tropics).

Ceviche is the most representative dish of Peruvian cuisine according to an Ipsos 2018 report whereby 77 percent of surveyed Peruvians overwhelmingly identified it as the national dish with other dishes such as "pachamanca" — a traditional but complex recipe that bakes spiced meats inside an underground oven made of hot stones — at 25 percent and 23 percent voting for "lomo saltado" — a sirloin beef stirfry that has been marinated with tomatoes and onions, served with fried potatoes and rice.

"It is a product that has its origins in the Pacific basin, given it is also consumed in Polynesia, Ecuador, Chile and Mexico, but it is only in Peru where it is one of the most consumed and popular dishes," Valderrama added.

The fact that ceviche is also a social pursuit was also taken into consideration for the submission, Adolfo Perret, a chef, told EFE.

"It is a dish that is anchored within homes, in our family units. It is an expression of where we come from and who we are," Perret added.

A key factor for choosing ceviche as Peru's contender for Unesco's intangible cultural heritage was the fact it ticked various boxes including its diversity, nutritional value and sustainability.

Sustainability, in particular, could be decisive for this nomination which taps into the protection of Peruvian seas that have faced several conservation challenges and for which Peru will have to ponder how it can include details as to how it would safeguard the oceans and fish, a required step in the application process for the prestigious Unesco title.

In line with this, the Unesco working group were also developing action plans, commitments and timelines in a bid to curb the threat rivers, lakes and oceans face with plastic pollution, illegal fishing techniques that rely on dynamite or banned nets and a demand to respect quotas on sizes of fish.

"The work will not finish the day we are all celebrating that ceviche is considered a Cultural Heritage, but rather the work will start then," Perret continued.

"The legacy will be a safeguarding policy that we will have to respect and that Unesco will ensure we enforce. That's the beauty of it," the chef concluded.