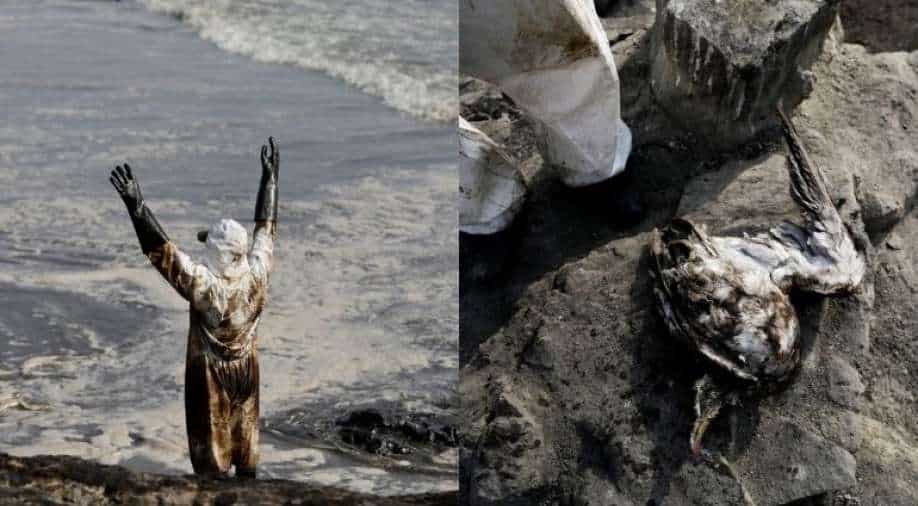 Peru's Lima Zoo is trying to save dozens of seabirds, including protected penguins, left covered in oil after 6,000 barrels of crude oil spilt off its coast as a consequence of waves caused by a volcanic eruption

The Peruvian government declared an environmental emergency Saturday to deal with a spill caused by freak waves from a volcanic eruption in the south pacific.

Last Saturday, a powerful eruption of an undersea volcano near Tonga unleashed tsunami waves as far away as the United States.

As a result of the oil spill near Lima, beaches have been polluted, birds have been killed, and tourism has been adversely affected.

Peru's Lima Zoo is trying to save dozens of seabirds, including protected penguins, left covered in oil after 6,000 barrels of crude oil spilt off its coast as a consequence of waves caused by a volcanic eruption.

The Parque de Las Leyendas zoo has rescued more than 40 birds from polluted beaches and nature reserves, including Humboldt penguins, which are listed as vulnerable by the International Union for Conservation of Nature.

"We are doing everything we can. It is not a common occurrence and we are doing our best."

Veterinarians are caring for the birds by bathing them with special detergents in order to remove the suffocating oil.

The government has issued a 90-day decree. As part of the decree, the government has committed to "sustainable management" of the 21 beaches tarred by 6,000 barrels of oil that spilt from a tanker ship last Saturday while unloading at a refinery.

Its objectives include improving the organization of agencies and teams working after a disaster, according to the environment ministry.

The environment ministry said it issued the emergency decree because crude still in the water was reaching a distance of 40 kilometres (25 miles) from where the spill originally occurred.

It added that "the spill amounts to a sudden event of significant impact on the coastal marine ecosystem, which has major biological diversity."

Roberto Sanchez, the foreign trade and tourism minister, estimated that economic losses totalled more than $50 million across all sectors.

As per the environment ministry, the spill affected 174 hectares -- about 270 football fields worth -- of beach and 713 hectares of the sea were affected, as sea currents spread the spilt oil along the coast.

The cleanup crew has been working on the spill for days.

"There are species here that feed on crustaceans and fish that are already contaminated," he said.

Spanish energy giant Repsol, which owns the refinery, is being sued for damages by the government.

The company Repsol has said the spill occurred due to the freak waves caused by the eruption and that it is not responsible for the spill since there were no warnings given by the government that rough waters would result from the undersea blast.

Repsol announced Saturday that 1,350 people were involved in the cleanup effort, which included big-rig trucks, skimmers, floating containment barriers, and other tools.

In a statement, Repsol said it is "deploying all efforts to attend to the remediation of the spill."