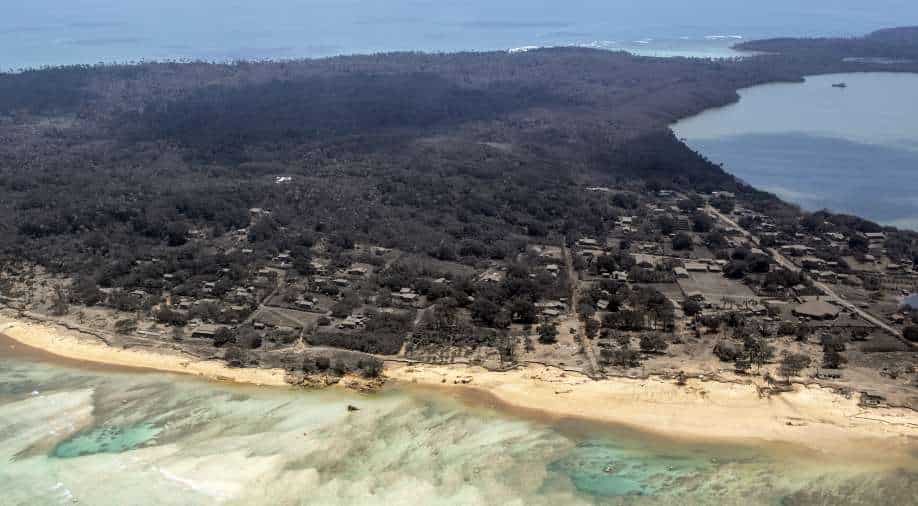 The tsunami is known to have killed one person on Mango and another on Nomuka, as well as a British woman on Tongatapu who was swept away while trying to save her dogs. The Tongan government has evacuated all of Mango’s residents to Nomuka, but people in Fonoifua opted to stay, said Yutaro Setoya, the representative for the World Health Organization in Tonga.

Tonga, the Pacific nation that was struck by a powerful tsunami last weekend, consists of about 170 islands, some tiny, stretching across 270,000 square miles, an area roughly the size of Texas.

The vast majority are uninhabited. Of Tonga’s roughly 100,000 people, 70% live on the biggest island, Tongatapu, a center for tourism and commerce, while the others are dispersed across about 35 islands — some home to just a few dozen families, appearing on world maps as little more than freckles of land in a seemingly endless sea.

The remoteness of those islands has protected a relatively simple way of life, in a seemingly picture-perfect tropical paradise: blue skies, crystalline waters and thickets of emerald palms giving way to sandy beaches. But the devastating Jan. 15 tsunami, caused by the eruption of the Hunga Tonga-Hunga Ha’apai underwater volcano, has wreaked catastrophic damage across three of them.

“Homes have been completely wiped out,” Katie Greenwood, a spokesperson for the Red Cross in Fiji, said of the three islands, Nomuka, Mango and Fonoifua. “It is heartbreaking and devastating for these remote island communities.”

As of Saturday, just three deaths from the tsunami had been confirmed in Tonga. Because the disaster damaged an undersea cable, communications have been limited, and the full extent of the damage is not clear.

But Greenwood said Nomuka, Mango and Fonoifua were buffeted by waves almost 50 feet high, compared with waves of only 4 feet on Tongatapu. On Mango, brown and gray ash deposits cover the entire island, and the settlement there, which once included a school and a simple, red-roofed church, appears to have been swept away, an analysis from the United Nations showed.

Only two homes remain on Fonoifua. And Nomuka, which is larger and has a population of 500, had extensive damage. It is by far the hardest hit of any of Tonga’s inhabited islands, many of which suffered only superficial damage and extensive ashfall.

The three are part of the Ha’apai group of five dozen coral and volcanic islands, a journey of more than eight hours by ferry from Tongatapu. Mango is about 43 miles from the volcano.

The tsunami is known to have killed one person on Mango and another on Nomuka, as well as a British woman on Tongatapu who was swept away while trying to save her dogs. The Tongan government has evacuated all of Mango’s residents to Nomuka, but people in Fonoifua opted to stay, said Yutaro Setoya, the representative for the World Health Organization in Tonga.

“We deployed our emergency medical team to go to Nomuka,” he said by telephone from Tongatapu. “From what I hear from them, almost half of the housing were washed away, including the health facility, so they set up a temporary clinic at one of the churches.”

The islands now face considerable challenges, Setoya said. “Of course, there’s ash everywhere on Nomuka, as the wind was blowing that way, which has contaminated the water sources,” he said. “Drinking water and food is becoming an issue there.”

Koniseti Liutai, deputy president of the Tonga Australia Chamber of Commerce in Sydney, is among those waiting for news from relatives in Ha’apai.

“It will set a lot of people back,” he said. “We know whole islands have been wiped out. People struggle to get by every day, and now they need to try to rebuild a house.”

Lynne Dorning Sands, a former teacher who has been traveling the world in a catamaran with her husband, Eric, visited Nomuka and Mango in 2016.

“It was really a special experience,” Dorning Sands, who said she was in waters off the Philippines, said in a message. She recalled children coming out to meet their boat in Nomuka, pigs roaming freely on Mango and seeing whales every day.

“At one stage, we had whales all around the boat,” Dorning Sands said. “We were being so careful not to hit them, as they were everywhere!”

On Mango, where about 35 people lived before the tsunami, Dorning Sands visited the school: a single building, brightly decorated with students’ work and with a corner for reading. There, she met the school’s 13 pupils, aged between 3 and 13, and its lone teacher, who introduced himself as John.

“When we asked if they had a shop on the island, he said, ‘We have everything we need here. We don’t need a shop. We can grow our food, we have pigs and we catch fish,’” she said. “For anything else, they can go to another island.”

Mote Pahulu, who was born on Nomuka and grew up on Mango, told the New Zealand news outlet Newshub that the woman killed on Mango was married to one of his cousins.

“We’re absolutely devastated. Not only have we lost a relative, a very close relative, but everything else on the little island is gone,” said Pahulu, who lives in Auckland, New Zealand. “It was a beautiful little island; it was a little paradise.”