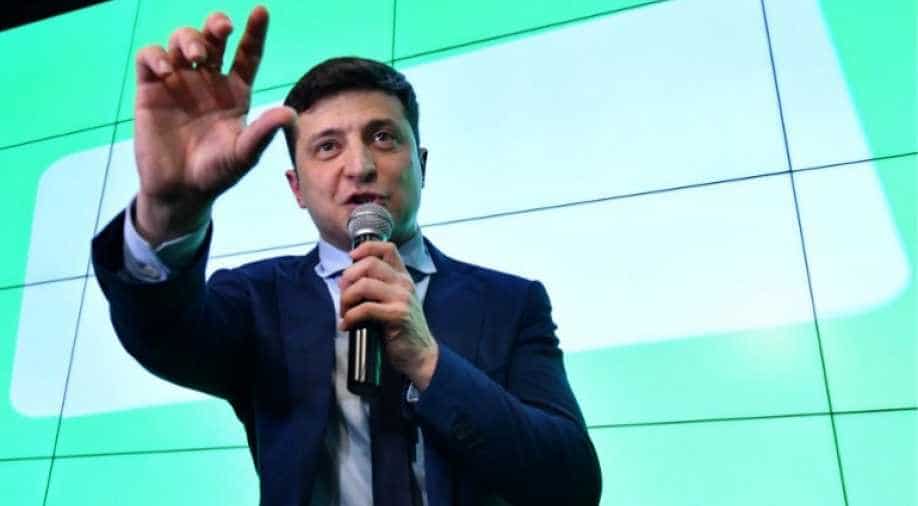 The election commission website gave actor Zelensky 30.2 per cent with Poroshenko trailing on 16.7 per cent, with just over half of all votes counted.

Zelensky's political experience had been limited to playing the president in a TV show when he announced his long-shot candidacy at the start of the year.

But the 41-year-old capitalised on frustration over corruption and a stalling economy to leapfrog his establishment opponents.

The election commission website said Zelensky had 30.2 per cent of the vote and Poroshenko 16.7, with just over half of all votes counted.

The pair will now meet in a run off set for April 21.

Ex-prime minister Yulia Tymoshenko, who was herself favourite when she launched her campaign, was knocked out with 13.08 per cent of the vote, the figures showed.

Zelensky had topped opinion polls for weeks and the main question going into the Sunday vote was who of Tymoshenko and Poroshenko would meet him in the second round.

But the size of his victory came as a surprise to many in Ukraine.

If the actor wins the vote in April, as opinion polls suggest, he will take the reins of one of the poorest countries in Europe -- a nation of 45 million people fighting Russian-backed separatists in its industrial east.

Political analyst Anatoliy Oktysyuk of Kiev's Democracy House centre said it would be "difficult" for Poroshenko to knock the actor off course.

"He (Poroshenko) has no room for growth. He has played all his cards," Oktysyuk said.

"This is a protest against the old elites and a call for new faces."

Oktysyuk suggested Poroshenko would try to frame the contest as part of a wider confrontation between Moscow and the West -- presenting himself as the only candidate who could stand up to the Kremlin.

The president said the results were a "harsh lesson" for him personally and for the country's authorities as a whole after exit polls were released late Sunday.

Zelensky has yet to spell out in detail what he would do in power and one of his campaign slogans was: "No promises. No apologies."

Despite concerns about his vague platform, supporters insist only a total outsider can clean up Ukraine's murky politics.

Some accuse Zelensky of acting as a front for the interests of oligarch Igor Kolomoysky, who owns the channel that broadcasts the entertainer's shows, but he denies any political links.

The actor eschewed rallies and interviews in favour of playing gigs with his comedy troupe up to the final days of campaigning.

His political comedy "Servant of the People" returned for its third series this week.