Parents were duped, their lawyers say in start of college admissions trial 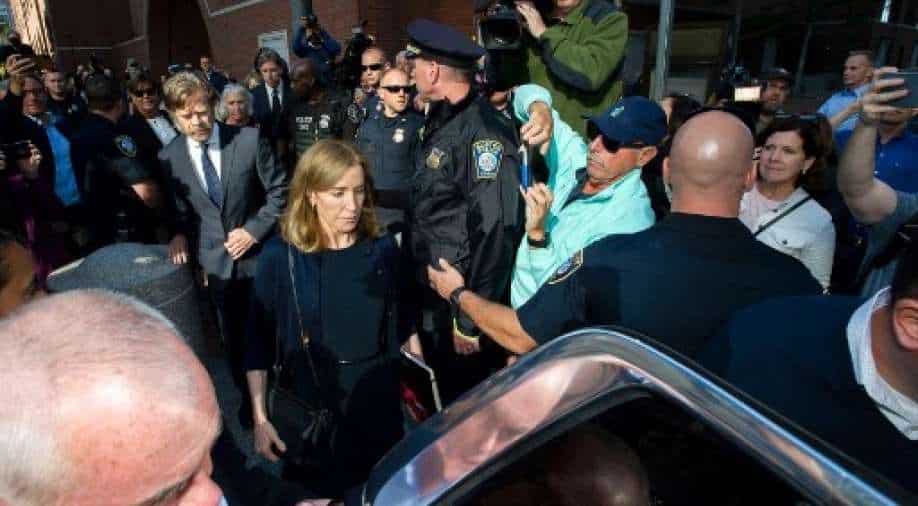 Felicity Huffman was sentenced for her role in college admissions scandal Photograph:( AFP )

The government had said that it did not intend to put Singer, who has pleaded guilty to racketeering, on the witness stand, but that the jury would hear his words on tape and in emails.

During opening statements Monday, the defense lawyers for Gamal Abdelaziz and John Wilson made clear that their clients — the first parents to face trial in the sprawling college admissions scandal — would not be the only ones up for judgment.

The defense lawyers portrayed the men as the victims of William Singer, known as Rick, who they say presented himself as a gifted admissions consultant, but who actually gulled the fathers into thinking they were making legitimate donations to help their children get into the University of Southern California.

And the defense lawyers also cast a jaundiced eye on the college admissions process, which they suggested was open to manipulation and money through their athletic programs.

“He thought Singer was legitimate,” Brian T. Kelly, the lawyer for Abdelaziz, said in his opening statement in Boston federal court. “He had no inkling that Singer was a skilled con man.”

The prosecution, however, said the parents were willing accomplices in a scheme that Leslie Wright, an assistant U.S. attorney, called “fraud” and “bribery.”

Singer told the parents that they could bypass the regular admissions process by presenting their children as athletic recruits, and he falsified or embellished their credentials so they could do that, the prosecutor said. Abdelaziz’s daughter was promoted as a basketball player, and Wilson’s son was presented as a water polo recruit, even though neither child was actually good enough to play at the university.

Wilson wanted his twin daughters to go to Harvard or Stanford. They were good students but “he did not want to take any chances,” Wright said in her opening statement. “He wanted to make sure they got in. He wanted a guarantee.”

Singer, who by then was cooperating with the government, told Wilson that his twin daughters could pose as sailors because he had a house in Hyannis Port, Massachusetts, the prosecutor said, and that he would arrange for Harvard and Stanford to recruit them in exchange for donations of $1.5 million.

Wright told the jury that the athletics department had the power to recruit high school athletes and superstars who would go on to play professional sports. But the scheme Singer concocted was a perversion of the official process, she said, facilitated by corrupt insiders while the admissions officers were in the dark.

“What these two defendants did was criminal,” Wright said. “They participated in a scheme to have their children admitted to college as fake athletic recruits in exchange for money. That’s fraud. It is also a form of bribery.”

She added: “The parents did not come up with the scheme. That was Rick Singer. But without them, it never would have happened.”

She also cautioned that the case was not about anything the children had done.

The federal investigation, known as Operation Varsity Blues, has snared more than 50 parents, coaches, exam administrators and others in an admissions scheme that implicated athletic coaches from colleges including Yale, Stanford, USC, Wake Forest and Georgetown. The government said those arrested were part of a conspiracy that facilitated cheating on college entrance exams and the admission of students as trumped-up athletic recruits.

Over the past 2 1/2 years, 33 parents - including actresses Felicity Huffman and Lori Loughlin, and Loughlin’s husband, Mossimo Giannulli, a fashion designer - have pleaded guilty, receiving sentences up to nine months in prison. Three more parents are scheduled to go on trial in January, and one in April.

In opening statements, the defense lawyers admitted that their clients had paid hundreds of thousands of dollars to Singer, but said they did not know that he was fabricating or embellishing athletic credentials for their children.

In some cases the money was funneled through Singer’s foundation, which allowed the parents to write off the payments as charitable contributions, the prosecutor said. The defense said Monday that the parents had no reason to suspect that the charity, which was registered, was a fraud.

The government said Monday that it did not intend to put Singer, who has pleaded guilty to racketeering, on the witness stand, but that the jury would hear his words on tape and in emails. The defense foreshadowed that it would try to show that Singer had been coerced by the government into painting some parents as criminals even though he did not really believe they were.

The defense lawyers tried to turn their wealthy clients into people the jury could relate to. Kelly pointed out Abdelaziz’s wife, who was sitting in the audience. (Almost everyone in the courtroom wore masks.)

Wilson, who runs a private equity firm, never knew his biological father, according to his lawyer, Michael Kendall, and his mother raised him in a housing project after she became pregnant with him as a teenager. Inspired by his own struggle growing up, Wilson had made a practice of donating millions of dollars to educational causes, Kendall said.

Singer cultivated a personal relationship with the Wilson family, Kendall said. “For three years, he regularly came to the Wilson house,” giving his son advice on tutors, writing coaches and sports, Kendall said. Singer knew that Wilson, whom his lawyer described as “the kid from the projects,” would be “generous and would trust his advice.”

Prosecutors say that Wilson paid $220,000 to have his son, Johnny, designated as a water polo recruit. He was admitted to USC but “redshirted” from the start, meaning that he was one of several players who did not get to play, Wilson’s lawyer said in his opening statement. He left the team after one semester.

Abdelaziz, a former casino executive, had previously hired Singer for a $5,000 fee — more typical of admissions consultants — to coach his son, Adam, on getting into college, Kelly said. After Adam was admitted to Columbia, the university’s development office reached out to Abdelaziz for a donation, and he gave $200,000, Kelly said.

So it seemed normal, Kelly said, when Singer suggested that a donation would facilitate the admission of his daughter Sabrina to USC as a competitive basketball player.

“That’s what these private schools do,” Kelly said. “It’s not illegal to do fundraising, not illegal to give money to a school in the hopes that your kid will get in.”

Prosecutors have said that Sabrina did not even make the cut for her high school varsity team.

In court, Kelly introduced a tape of Singer speaking at an event. “My goal today is to teach you what goes on behind closed doors,” Singer could be heard saying on the tape. “If you really want to win at this game, you have to be a part of this game.”

But the prosecutor, Wright, suggested that if this was a game, Singer — aided by a network of corrupt insiders — was not playing by the rules.

“Here’s what the admissions department at these schools did not know, what the insiders did not tell them,” Wright told the jury. “These were not real recruits. They were never going to play.”