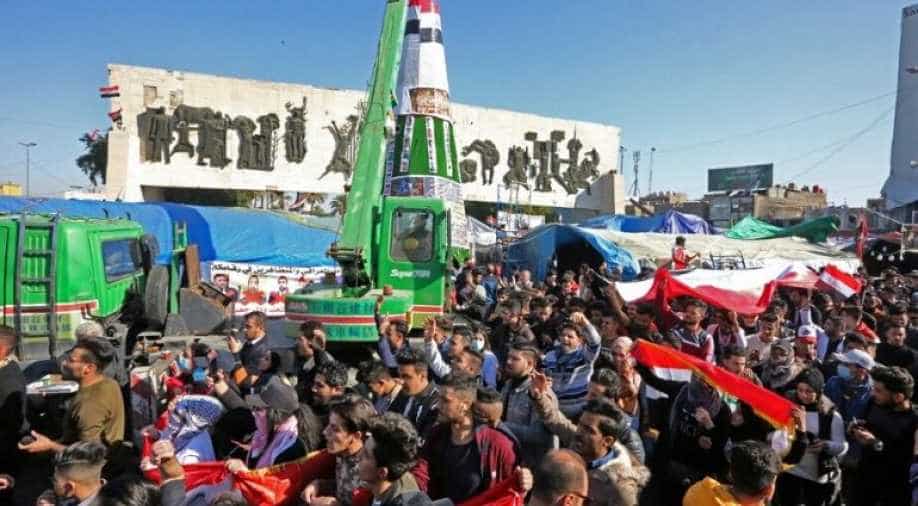 Once again the capital's iconic Tahrir Square began filling early in the day, with protesters making clear their opposition to names touted by the establishment to fill the post of prime minister.

Iraqi protesters stepped up their demonstrations Tuesday with the authorities in Baghdad increasingly paralysed as they seek a way out of a political impasse.

Once again the capital's iconic Tahrir Square began filling early in the day, with protesters making clear their opposition to names touted by the establishment to fill the post of prime minister.

Portrait pictures of these candidates marked by a huge red cross increasingly adorn facades of buildings and tents in the protest area.

And once again the main avenues and roads in cities in the south of the country were blocked, as well as entrances to schools, universities and government buildings.

After dwindling in recent weeks, the civil disobedience campaign has rediscovered its vigour, as the protesters seek to uproot a political system condemned as deeply corrupt.

Negotiations over a candidate to replace premier Adel Abdel Mahdi, who quit in November in the face of protests against corruption and unemployment, have remained deadlocked since the latest in a series of deadlines expired at midnight on Sunday.

While a pro-Iran camp has tried to impose a candidate, Iraqi President Barham Saleh has reportedly put up resistance.

For Iraqis protesting since October 1, the system installed by the United States after it led a military coalition to overthrow dictator Saddam Hussein in 2003 has become overly beholden to Iran and is beyond reform.

A long-promised economic revival in OPEC's number two oil producer never came, protesters say, with more than half of all oil revenues syphoned off by crooked politicians and their cronies.

Watch: Thousands Protest in Iraq Ahead of Deadline to Name New PM

Rallies have continued despite a campaign of intimidation that has included targeted killings and abductions of activists, which the United Nations blames on militias.

Politicians have been desperately trying to agree on who will be the next prime minister. But unable to find a parliamentary majority, time is running out.

The timetable set out in the constitution has already been overshot, with new negotiations due on Tuesday in the face of intransigence by pro-Iranian parties.

Parliament failed to meet as planned on Monday as there was no quorum.

"Every hour they come up with a new candidate, but we want someone who is independent," said one young demonstrator, standing in front of burning tyres on a road into southern Basra.

"We're ready to continue the general strike, a day, two days, three days even a hundred years if that's what it takes," he added, his face covered by a scarf to keep out the acrid smoke.

Officials say Iran wants to install Qusay al-Suhail, who served as higher education minister in the government of Abdel Mahdi.

Parliament speaker Mohammed al-Halbusi, a Sunni, has announced he has dropped his support for Suhail, after a source in the presidency said Saleh had vetoed the proposed appointment.

Instead, Halbusi has urged his pro-Iran allies to come forward with another name.

As soon as the name of Assaad al-Aidani, the governor of Basra, began circulating, however, protests erupted in his oil-rich southern province, with demonstrators blocking roads to the ports, an AFP correspondent said.

Roads to Nasiriyah, Diwaniyah and Hilla in the south were also cut as well as in Kut and the holy Shiite shrine city of Najaf, as strikers stopped government officials from reaching work and closed the doors to schools.

After "all the sacrifices" with close to 460 dead since the start of the demonstrations in early October and 25,000 wounded, the protesters say they will not return home "until all their goals are met".

They are demanding a new constitution, a new electoral law and a complete overhaul of the political system, in a country with crippling unemployment, especially among the young people who make up more than half the population.