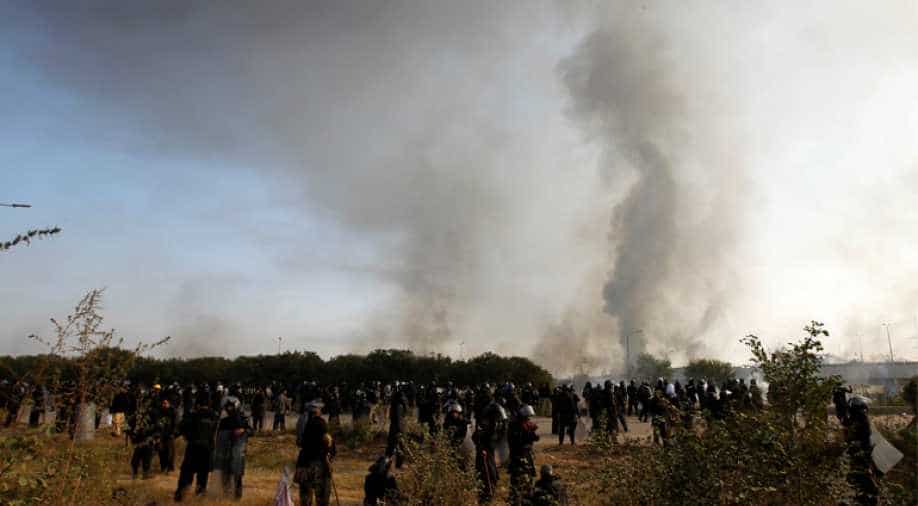 Police stand in their staging area and watch demonstrators near the Faizabad junction in Islamabad on November 25. Photograph:(Reuters)
Follow Us

The US feels that the civilian government in Pakistan is "weak" and the Army's role in ending the recent protests by hardline religious parties in the country has "emboldened" the extremists, a senior Trump administration official has said.

Pakistan last month witnessed countrywide protests by hardline religious groups after a reference to the Prophet Muhammad was left out of a revised version of the electoral oath.

The protesters called off the demonstrations after Law Minister Zahid Hamid resigned, meeting one of their key demands. A top Pakistani court had criticised the Army's role to mediate the agreement to end the protests that claimed the lives of six people and injured over 100 others.

"We have seen unhelpful relationships between the military and some of the hardline Islamist parties. We are observing...What happened and what role was played by the military. There is concern that the way these protests ended in a way has emboldened extremism and extremists in Pakistan," the official told PTI.

Observing that the "civil-military tension" in the country is "not helpful", the official speaking on condition of anonymity said: "The government, right now, is pretty weak. This was shown by the recent protest."

The official ruled that the handling of protests had made it easier in Pakistan for people to levy blasphemy charges which are very unhelpful.

There are dozens of Pakistanis on death row for alleged blasphemy in public.

"They feel they can take the law into their own hands and continue to levy blasphemy charges, which is unhelpful," said the official.

The freedom of speech, religion, and human rights inside Pakistan is getting worse, the official added.

The White House official further warned that there would be "repercussions" for any military coup in Pakistan, which has a history of such dictatorship at frequent intervals.

"I think the repercussions of military coup would be very great," the official said.

Not only the US-Pakistan relationship would be disrupted, all kinds of sanctions would come into play in case of a military coup.

"It would be very unhelpful," the official said, but quickly added "at this point of time I'm not convinced that the military is seeking to overturn the government."

But, the military certainly seeks to retain the power that they have within the Pakistani system.

"It would just be extremely unhelpful to see the military try and form the government again," the official said, hoping the upcoming general elections in Pakistan would be held on schedule next year.

The relations between Pakistan's civilian government and the powerful Army have long been fraught, with the military ruling the country for nearly half of its 70-year history.

"We're hopeful that there will be election in Pakistan as scheduled to be. And we recognise there may be some political uncertainties leading up to that election. But I think it's very important that that election is held and that Pakistan demonstrates to the world and to its own people that it continues to be a functioning democracy," the official said.