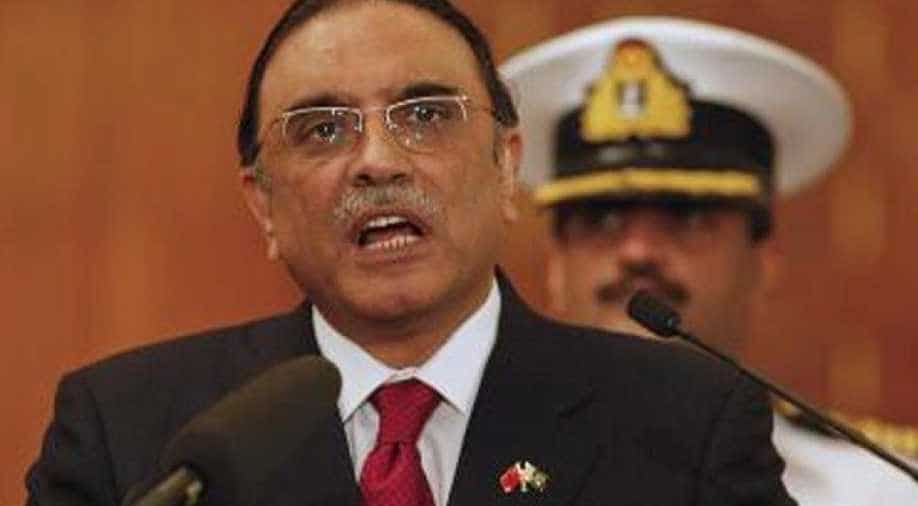 Information minister Fawad Chaudhry told reporters in Islamabad that Zardari and his sister Faryal Talpur were among 172 people involved in cases of money laundering and use of fake bank accounts.

Information minister Fawad Chaudhry told reporters in Islamabad that Zardari and his sister Faryal Talpur were among 172 people involved in cases of money laundering and use of fake bank accounts.

Zardari, co-chairman of the opposition Pakistan People's Party and who was president from 2008 until 2013, has long been the subject of corruption allegations, and is widely known in Pakistan as "Mr Ten Percent".

The announcement coincided with the 11th death anniversary of his spouse and two-time former prime minister Benazir Bhutto, who was killed in a gun and suicide bomb attack during an election rally in the garrison town of Rawalpindi on December 27, 2007.

"I hope Zardari will now take the JIT seriously," he said Thursday, adding that his government would not spare anyone involved in plundering national wealth.

But Zardari dismissed the allegations, branding the government an instrument of the powerful military and calling Prime Minister Imran Khan the army's "blue-eyed boy" at a rally marking his wife's death in the Bhutto family's ancestral town of Larkana, in southern Sindh province.

"They know nothing but how to appear on TV channels and make absurd comments and speeches. They lack even basic intelligence," he said of Khan's government in unusually fiery comments.

Khan, who came to power in July, has vowed to squash rampant corruption and recover billions siphoned from the country as his government scrambles to shore up Pakistan's deteriorating finances and fast-depleting foreign exchange reserves.

Zardari's travel ban comes days after former prime minister Nawaz Sharif was sentenced to seven years in prison for corruption on Monday, the latest in a long string of court cases against him.

Pakistan's Supreme Court disqualified Sharif from politics for life over graft allegations in 2017, ousting him from power. His Pakistan Muslim League-Nawaz was defeated by Khan in the July polls.

A Pakistani court established a commission in September to investigate the scourge of corruption, finding that at least $400 million had passed through "thousands of false accounts", using the names of impoverished people.

The commission said some 600 companies and individuals "are associated with the scandal".