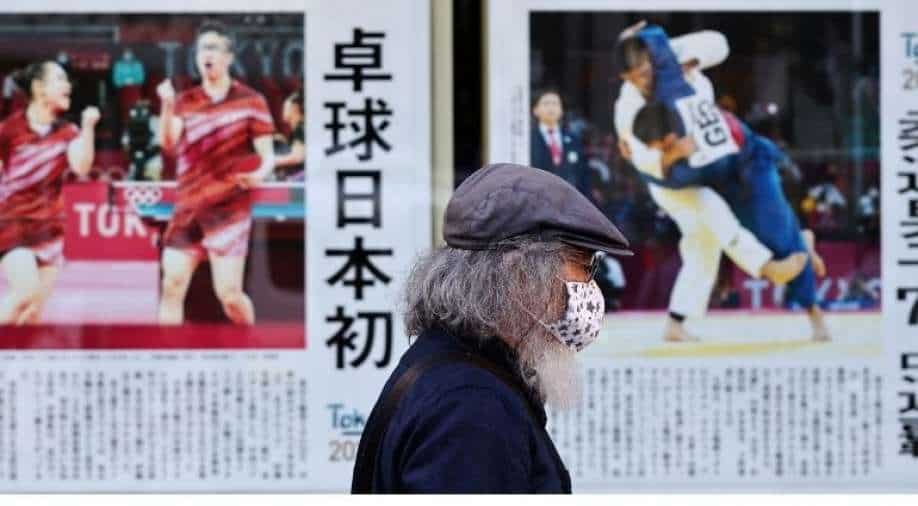 A man wearing a protective mask walks past a display of a newspaper reporting the Olympics in Tokyo Photograph:( Reuters )

Tokyo has witnessed a surge in COVID-19 cases in the last two days as the Olympic Games enters the second week.

The mega event has been taking place without spectators with the Delta variant sweeping the country with Tokyo being the hardest-hit city.

On Tuesday, Japan's capital city had recorded 2,848 coronavirus cases which was the highest since the pandemic hit the country last year with hospitalisations also rising.

Tokyo is under a state of emergency which is set to last throughout the Olympics and beyond as cases continue to rise in the capital city.

International Olympic Committee (IOC) spokesperson Mark Adams had said the public should be reassured by anti-virus measures taken by the games organizers while adding that there is no contact between the general public and the Games' organisers on a day-to-day basis.

Meanwhile, some athletes who have finished their events have already started returning home due to the strict COVID-19 protocol. Australia's softball team departed from the Olympic city with German kayak gold medallist Ricarda Funk set to leave on Thursday.

According to the guidelines, athletes must fly back within 48 hours of completing their event in order to minimise infection risk.

Olympic organizers on Wednesday had reported 16 new COVID-19 cases taking the total number of cases to 169.

Amid the virus, tropical storm Nepartak made landfall in northern Japan's Miyagi region. The organizers had earlier rescheduled some events ahead of the storm.

There were reports of wind and rain during the women's triathlon in Tokyo which was delayed due to weather conditions.