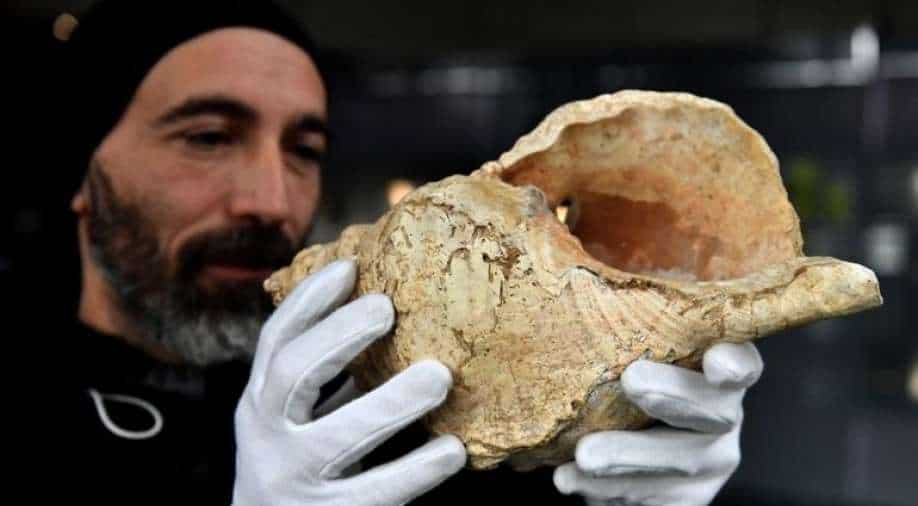 Guillaume Fleury, who works at the Museum of Natural History, shows a Charonia lampas trumpet shell, which was first found in 1931 in an archaeological dig at the mouth of the Marsoulas Cave, on Wednesday at the museum in Toulouse. Photograph:( AFP )

Scientists believe the ancient conch, from a species of large sea snail still present in the Atlantic and North Sea, is the oldest wind instrument of its type yet found

After more than 17,000 years of silence and decades forgotten in a French museum, a shell fashioned into a horn by our prehistoric ancestors has been played again as a result of new research published on Wednesday.

Scientists believe the ancient conch, from a species of large sea snail still present in the Atlantic and North Sea, is the oldest wind instrument of its type yet found.

The shell was unearthed in 1931 at an archaeological dig in the Pyrenees near the mouth of the Marsoulas Cave, whose walls are painted with the artwork of Magdalenian people living there at the end of the last ice age.

Scientists initially thought it bore no trace of human modification, assuming it was a type of ceremonial drinking cup.

It was taken to the Museum of Natural History in Toulouse and forgotten.

But a new examination using modern technology found not only that it had been altered, but that it could still hold a note.

Or three, as it turned out.

Played by a musician, it had tones close to C, C sharp and D. And it boomed at a resounding 100 decibels a metre from the conch.

"This sound is a link, a direct link with Magdalenian people," said Carole Fritz, lead author of the study and a senior scientist at the French National Centre for Scientific Research.

She said it was "very important because you have the sea in the cave", adding the shell was from the Atlantic, some 200 kilometres from the cave.

Instruments older than the conch have been found -- flutes whittled from the bones of large birds like swans and eagles -- but the researchers said this was the oldest shell horn, symbolising the importance of the ocean to Magdalenian people.

The study, published in Science Advances, said radio-carbon dating of items at the cave suggest it was occupied around 18,000 years ago.