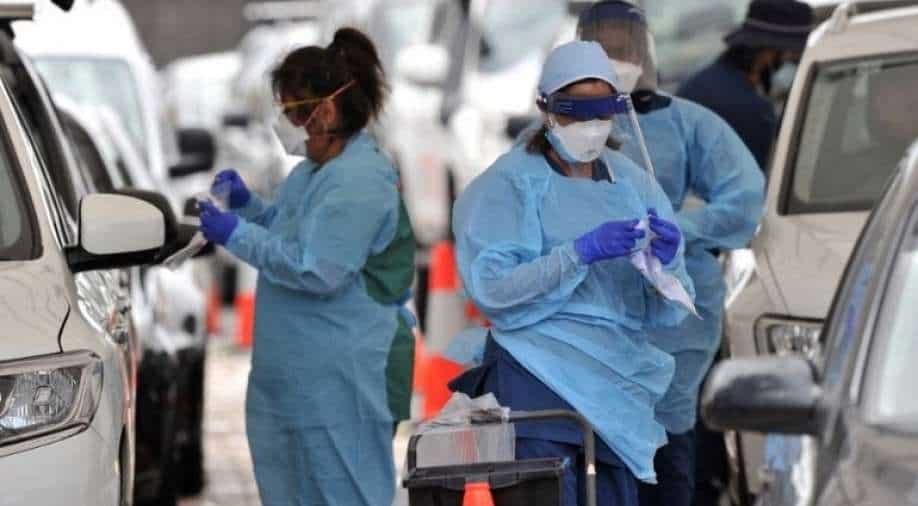 Health workers conduct PCR tests at the St Vincent's Bondi Beach COVID-19 drive through a testing clinic in Sydney, as the number of COVID-19 cases keeps on the rise across the New South Wales state Photograph:( AFP )

Omicron variant, which has been dubbed as the most transmissible variant of coronavirus, has been rapidly spreading through the island country

According to Hazzard, ''It’s time that the PCR test for tourism testing was dropped, preferably today… rapid antigen tests make more sense for people who are crossing the border.''

“This is passive-aggressive stupidity from the Queensland Premier at her worst,” Hazzard said.

“South Australia has seen the light and someone needs to switch on the lights in the Queensland Premier’s office,” he added.

"Although we are seeing increased case numbers... we are not seeing the impacts on our hospital system," said Annastacia Palaszczuk, premier of Queensland which reported 784 new cases with four people in hospital.

With reports of six-hour wait times for COVID testing for people hoping to meet requirements for interstate holiday travel, Palaszczuk defended the tourism-friendly state for mandatory testing, saying "everyone knew when they booked a ticket that if they wanted to come here they would have to do a PCR test".

However, she added that Queensland was considering whether to relax testing requirements for domestic visitors. Tasmania, another tourist-popular state, also said it was considering changes to state border testing rules.

Omicron variant, which has been dubbed as the most transmissible variant of coronavirus, has been rapidly spreading through the island country.

It is also believed that the increase in cases happened as domestic travel restrictions were lifted and more people were able to return to the state. This, many believe, led to an increase in the number of Covid cases in New South Wales.

The man who became the first victim to be consumed by the Omicron variant was among the six Covid deaths reported in the country on the previous day. Out of these six, this man was the only one who was suffering from Omicron variant of the deadly coronavirus.