Now, Taiwanese book trips to US territory of Guam to get vaccinated 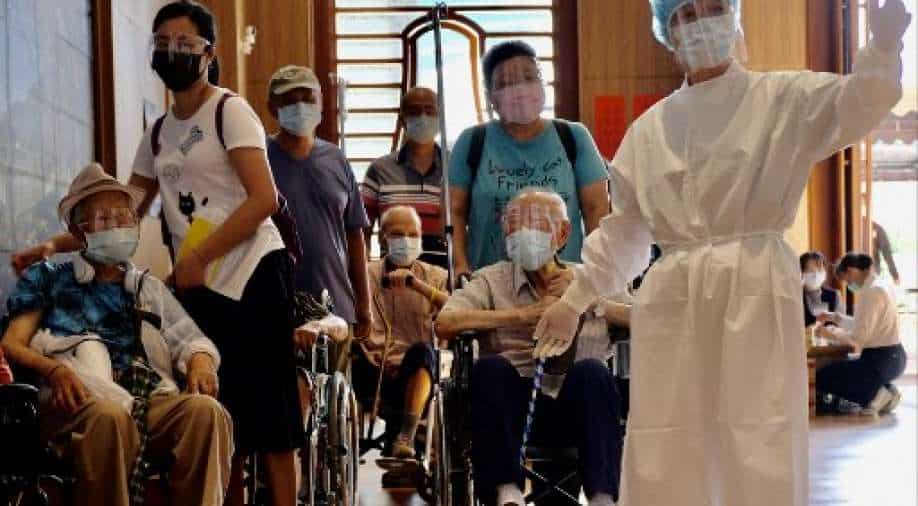 A medical personnel guides an elderly man for his vaccination against coronavirus at the Tzu Chi Hospita in New Taipei City Photograph:( AFP )

The Taiwan government had said earlier that it would request the easing of import and export of COVID-19 vaccines with the United States during trade talks.

Several hundred Taiwanese travellers have reportedly booked flights to the US Pacific territory of Guam after it launched a programme to vaccinate travellers.

Taiwan has been using the Moderna vaccine however it has been slow to vaccinate citizens due to a shortage of jabs. The country has reportedly vaccinated just nine per cent of its population so far out of 23.5 million people.

The Guam government has reportedly exempted travellers from mandatory quarantine from July 4 if they can show a negative coronavirus report.

A new programme "vacation and vaccination" has been launched aimed at US expatriates in the Asia-Pacific region but it is open to others as well as the government seeks to kickstart the economy which is largely dependent on tourism.

The travellers can choose between Pfizer, Moderna and Johnson & Johnson vaccines. The Taiwan government had said earlier that it would request the easing of import and export of COVID-19 vaccines with the United States during trade talks.

Taiwan has received  4.85 million COVID-19 vaccines so far with 2.5 million donated by the United States and another 1.24 million sent by Japan.

Another 410,000 doses of Moderna vaccine was due to arrive in the country on Wednesday as the country grapples with a virus surge. Taiwan reported 54 fresh coronavirus cases on Tuesday with the virus numbers surging for the past two months.

In May the government had raised an alert in Taipei after a sudden surge in COVID-19 cases.

Taiwan government had earlier blamed China for blocking a deal with Germany's BioNTech for coronavirus vaccines.

"As for Germany's BioNTech, we were close to completing the contract with the original German plant, but because of China's intervention, up to now there's been no way to complete it," President Tsai Ing-wen had said.

However, China denied the allegations asserting that Taiwan can procure the vaccines through Shanghai Fosun Pharmaceutical Group which has a contract to sell BioNTech's vaccine in Taiwan, China, Macau and Hong Kong.