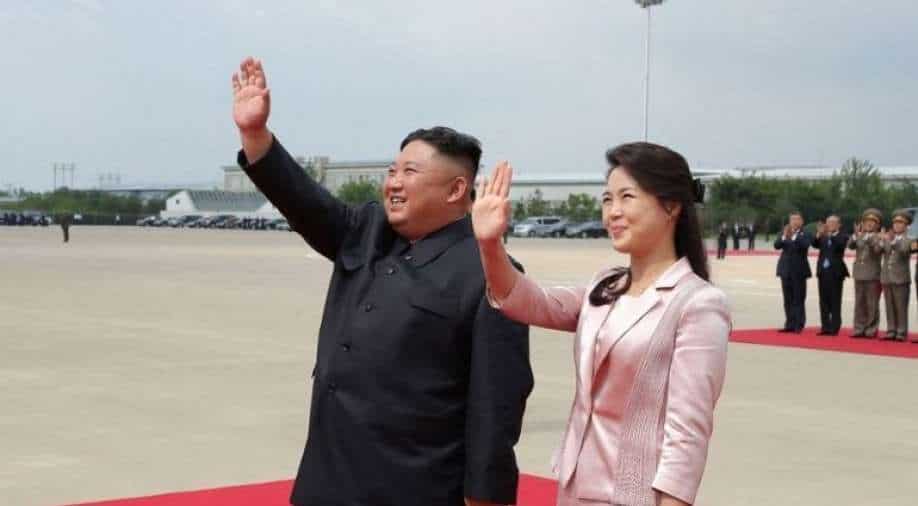 Ri Sol Ju, was seen with the North Korean leader at an art performance at the Mansudae Art Theatre in the capital, Pyongyang, celebrating the Lunar New Year holiday

Ri Sol Ju, was seen with the North Korean leader at an art performance at the Mansudae Art Theatre in the capital, Pyongyang, celebrating the Lunar New Year holiday.

"When (Kim) appeared at the auditorium of the theatre with his wife, Ri Sol Ju, amid the playing of the welcome music, the audience raised stormy cheers of 'Hurrah!'" the official KCNA news agency said.

Also read | 'Dirty, disgusting' depictions of Kim Jong-un's wife in leaflets may have set off a stronger anti-South rhetoric

She wore a traditional red-and-black hanbok dress, chatting and smiling with Kim during the show, and the couple taking the stage to shake hands and take a photo with the artists.

Kim Jong Un and his wife were seen smiling and praising the performers at the concert in Pyongyang in the photos published by North Korea's official Rodong Sinmun newspaper.

Ri was last seen publicly on September 9, when she joined her husband in visiting the Kumsusan Palace of the Sun, which houses the embalmed bodies of Kim's late grandfather and father, on the anniversary of the country's founding.

She has garnered international attention as she often accompanied Kim on social, business and even military outings, in a stark break from his father, Kim Jong Il, who was rarely seen in public with any of his wives.

Domestically, North Korea is preparing to celebrate the 80th anniversary of the birth of late leader Kim Jong Il in February, as well as the 110th birthday of founder Kim Il Sung in April.

The birthday of former North Korean dictator is known as the Day of the Shining Star and is one of the nation's most important public holidays.