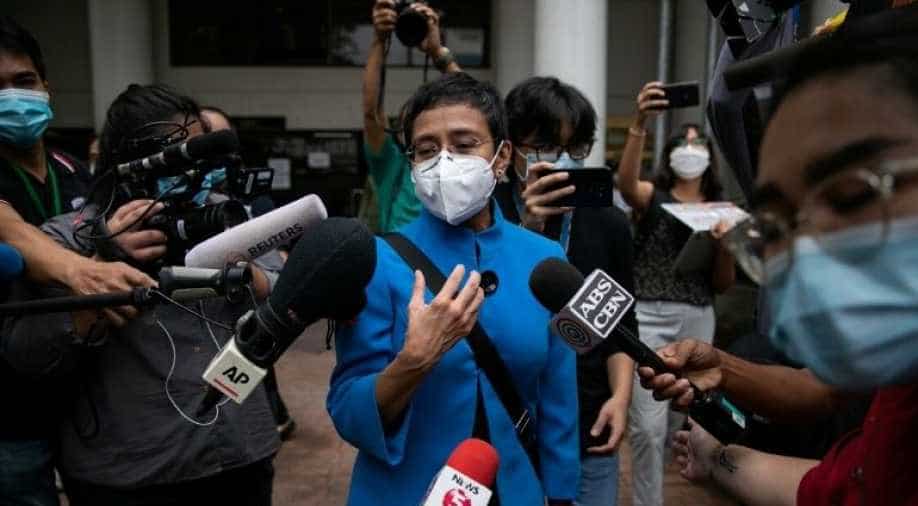 The speeches by the two journalists contained dire warnings that the world is headed toward more violence and misery without a renewed commitment to democracy and the values connected to it: truth, peace and human rights

The two journalists awarded the Nobel Peace Prize, Maria Ressa and Dmitri A. Muratov, used their acceptance speeches Friday to express alarm about the threats to democracies and call for greater accountability for social media companies that Ressa said are dividing and radicalizing societies.

The speeches by the two journalists contained dire warnings that the world is headed toward more violence and misery without a renewed commitment to democracy and the values connected to it: truth, peace and human rights.

Ressa, 58, the first Nobel laureate from the Philippines, is the chief executive of Rappler, a digital news organization that is known for its investigations into President Rodrigo Duterte’s brutal five-year war on drugs. In her speech, she said social media companies still operated with impunity.

“Silicon Valley’s sins came home to roost in the United States on Jan. 6 with mob violence on Capitol Hill,” she said.

“These American companies controlling our global information ecosystem are biased against facts, biased against journalists,” she said. “They are — by design — dividing us and radicalizing us.”

Muratov, 60, has been the editor-in-chief of Novaya Gazeta, Russia’s most fearless national newspaper, for more than 25 years.

He made an impassioned plea against an escalation of violence, condemning the “militaristic rhetoric” prevalent in Russian state controlled media.

His remarks — coming as Russia has massed nearly 100,000 troops across Ukraine’s borders, raising concerns of an invasion — were meant to serve as an urgent warning.

“The powerful actively promote the idea of war,” he said. “Aggressive marketing of war affects people and they start thinking that war is acceptable.”

At the same time, he said, the ideas of liberal democracy are under threat.

Ressa has long been an outspoken critic of the authoritarian leader in her homeland, Duterte, whose government has filed seven criminal charges against her, including for cyber libel and tax evasion. She also has been critical of social networks for spreading disinformation and hatred.

“Our greatest need today is to transform that hate and violence, the toxic sludge that’s coursing through our information ecosystem, prioritized by American internet companies that make more money by spreading that hate and triggering the worst in us,” Ressa said in her speech.

Since it started in January 2012, Rappler has become one of the Philippines’ most popular and influential media platforms, mixing reporting with calls for social activism. Rappler’s reporters, most of whom are in their 20s, have investigated Duterte’s extrajudicial campaign to kill people suspected of dealing or using drugs, documented the spread of government disinformation on Facebook and reported on malfeasance among his top advisers.

Muratov has dedicated the prize to his slain colleagues at Novaya Gazeta. Six of the paper’s journalists or contributors died under his watch, including Anna Politkovskaya, whose 2006 murder in the elevator of her apartment block has never been solved. When the award was announced, he also said that opposition politician Alexei Navalny, who was poisoned last year and has been in jail since January, deserved to have received it.

Muratov is the third Russian to win the Nobel Peace Prize, after the Soviet leader Mikhail Gorbachev and the physicist and dissident Andrei D. Sakharov, who won in 1975 for his human rights advocacy.

He waded directly into the issue that has gripped leaders across the Western world in recent weeks: the threat of a military conflagration in the heart of Europe.

He also spoke about political repression and torture in contemporary Russia.

“We hear more and more often about torture of convicts and detainees,” he said. “People are being tortured to the breaking point, to make the prison sentence even more brutal. This is barbaric.”

He said he would present an initiative to set up “an international tribunal against torture, which will have the task to gather information on torture in different parts of the world and different countries, and to identify the executioners and the authorities involved in such crimes.”

Ressa and Muratov were the first journalists to receive the Nobel Peace Prize since 1935, when it was awarded to Carl von Ossietzky, a German who was afterward detained in a Nazi concentration camp and later died.

“By giving this to journalists today, the Nobel committee is signaling a similar historical moment, another existential point for democracy,” Ressa declared. “We’re at a sliding-door moment, where we can continue down the path we’re on and descend further into fascism, or we can each choose to fight for a better world.”

In both laureates’ home countries, the climate for independent journalism is dire.

In 2020, a global survey of press freedoms by Reporters Without Borders ranked the Philippines 138th out of 180 countries. Russia was 150th.

After Ressa arrived in Oslo to attend the Nobel ceremony, she heard the news that a former colleague, Jesus Yutrago Malabanan, a prominent Philippine reporter who had investigated Duterte’s drug war, had been shot in the head and killed.

Ressa, in her remarks, said she spoke as a “representative of every journalist around the world who is forced to sacrifice so much to hold the line, to stay true to our values and mission: to bring you the truth and hold power to account.”

She called on the audience to ask themselves “What are you willing to sacrifice for the truth?”