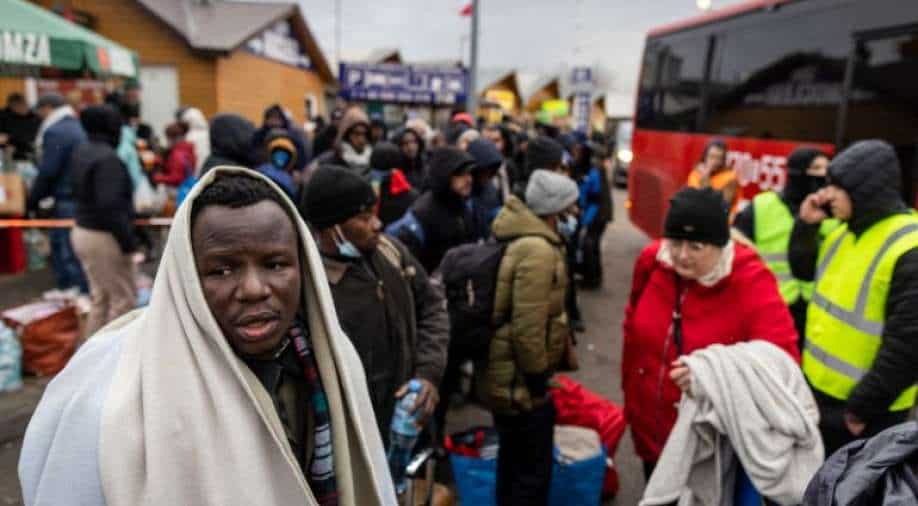 Refugees from many diffrent countries - from Africa, Middle East and India - mostly students of Ukrainian universities are seen at the Medyka pedestrian border crossing fleeing the conflict in Ukraine, in eastern Poland on February 27, 2022. Photograph:( AFP )

Nigerians, Ghananians and other Africans, many of them students, have joined hundreds of thousands of people trying to escape Ukraine across borders into Poland and other nations

Nigeria on Monday urged border officials in Ukraine and neighbouring countries to treat its citizens equally amid mounting reports of racial discrimination against Africans fleeing the Russian invasion.

Nigerians, Ghananians and other Africans, many of them students, have joined hundreds of thousands of people trying to escape Ukraine across borders into Poland and other nations.

"There have been unfortunate reports of Ukrainian police and security personnel refusing to allow Nigerians to board buses and trains heading towards the Ukraine-Poland border," said presidential advisor Garba Shehu in a statement.

"In one video widely circulating on social media, a Nigerian mother with her young baby was filmed being physically forced to give up her seat to another person."

He said there are also separate reports of Polish officials refusing Nigerian citizens entry into Poland from Ukraine.

"Those in official positions in security and border management will in most cases be experiencing impossible expectations in a situation they never expected," he said.

"For that reason, it is paramount that everyone is treated with dignity and without favour."

"Everybody receives equal treatment. I can assure you that I have reports that already some Nigerian nationals have crossed the border into Poland," she told local media.

She said Nigerians had 15 days to leave the country or find other arrangements. Even invalid documents were being accepted to cross the border and Covid-19 restrictions were lifted, she said.

The Ukrainian embassy in Nigeria could not immediately be reached for comments.

The European Union on Sunday moved to coordinate management of hundreds of thousands of Ukrainians fleeing the Russian attack.

Around 400,000 Ukrainians have crossed into the EU since the start of the offensive on Thursday, according to an AFP tally. Half of them entered Poland, its government said.