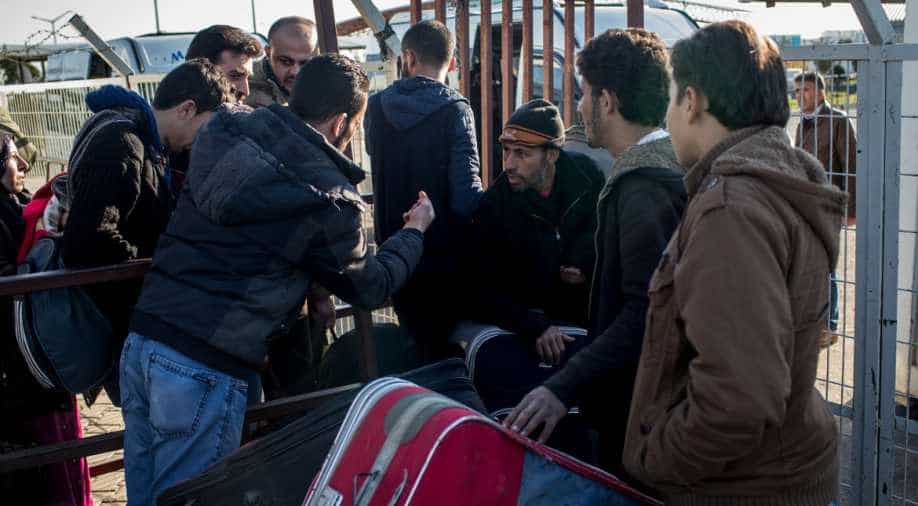 Men wishing to leave Turkey stack up luggage as they wait in line to pass through a border gate as a small number of Syrian refugees were allowed to return to Syria at the closed Turkish border gate on February 8, 2016 in Kilis, Turkey. Photograph:( Getty )

"Nearly 10,000 civilians have fled east Aleppo since the night of Saturday to Sunday," the Syrian Observatory for Human Rights said. "At least 6,000 of them went to the neighbourhood of Sheikh Maksoud, the rest went to government zones of Aleppo."

Government forces retook six rebel-held districts of eastern Aleppo over the weekend, forcing huge numbers of civilians to flee as they pressed their offensive Sunday to retake Syria's second city.

On Sunday, the 13th day of the operation, they took control of the adjacent neighbourhoods of Jabal Badra, Baadeeen Inzarat, Al-Sakan, al-Shaabi and Ain al-Tall, according to the Observatory.

Government forces are now "in control of most of the northern part" of Aleppo, according to the monitoring group.

Around 250,000 civilians besieged for months in the east have faced serious food and fuel shortages. Once a commercial and industrial hub, Aleppo has seen some of the worst fighting in Syria's nearly six-year war.