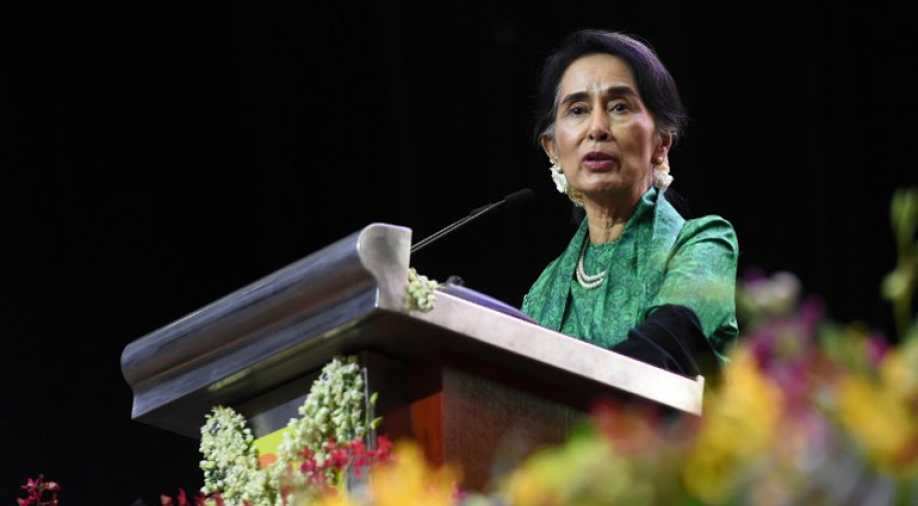 The visit marks a shift away from Myanmar's reluctant approach to cooperation with its western neighbour, which analysts see as key to solving the growing crisis. Photograph:( AFP )

A special envoy of Myanmar's leader Aung San Suu Kyi will begin top-level talks in Bangladesh on Wednesday, as the United Nations said the Rohingya crisis prompted 65,000 people to flee Myanmar for Bangladesh in the past three months.

The stream of new refugees and reports that Myanmar's navy has shot at Bangladeshi fishermen have further tested historically strained ties between the neighbours, who each see the stateless Rohingya Muslims as the other side's problem.

The visit marks a shift away from Myanmar's reluctant approach to cooperation with its western neighbour, which analysts see as key to solving the growing crisis.

Residents and refugees have described summary executions, arbitrary arrests and rape in the operation. Suu Kyi's government has denied almost all abuse allegations.

During the visit, the neighbours will discuss bilateral relations, but the Myanmar side was unlikely to bring up the "complicated" issue of border security, said Aye Aye Soe, deputy director of the Ministry of Foreign Affairs.

"For the border situation, an operation is still in progress to create stability, so I don't think there will be a lot of results from this first-time meeting," she said.

The official, who requested anonymity as he was not authorised to speak to the media, said Myanmar had initiated the visit "so that Bangladesh does not raise pressure on Myanmar on the Rohingya issue in international forums," such as an upcoming meeting of the Organisation of Islamic Co-operation.

"Bangladesh has been persuading and pressing in international forums behind the scenes so as not to hamper the relationship," the Bangladeshi official said.

Talks between the neighbours are complicated by the fact that as many as 500,000 Rohingya who fled to Bangladesh during decades of persecution in Myanmar are not recognised as citizens there either.

The United Nations Office for the Coordination of Humanitarian Affairs says that by Jan. 5 about 65,000 more people had arrived in Bangladesh since October 9.

Myanmar's Aye Aye Soe questioned the UN figure, saying anyone claiming to be a refugee from Myanmar would have to be scrutinised.

She referred to a longstanding government policy that repatriation talks can only cover 2,415 people in Bangladesh whom Myanmar recognises as citizens.

"We need to make sure how many people arrived and where they are from, but no one can confirm exactly," she said.