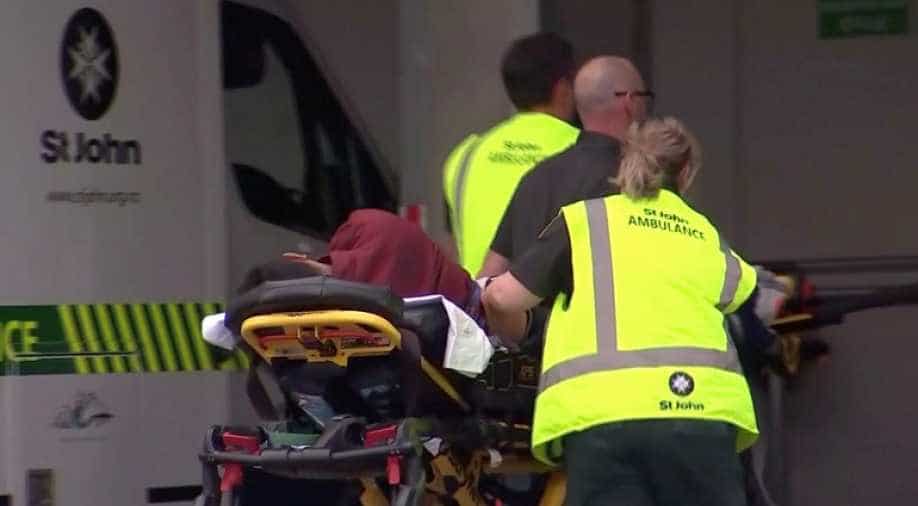 Emergency services personnel push stretchers carrying a person into a hospital, after reports that several shots had been fired, in central Christchurch, New Zealand. Photograph:( Reuters )

The Bangladesh cricket team was in the vicinity of the shooting but all members were safe, a team coach told media.

New Zealand police were hunting "an active shooter" in the centre of Christchurch city on Friday after a gunman opened fire at a mosque inflicting several casualties.

"A serious and evolving situation is occurring in Christchurch with an active shooter," New Zealand Police Commissioner Mike Bush said.

"Police are responding with its full capability to manage the situation, but the risk environment remains extremely high."

The Bangladesh cricket team was in the vicinity of the shooting but all members were safe, a team coach told media.

Media reported that a gunman opened fire inside mosque in Christchurch's Hagley Park. There were reports of armed police at a second mosque in the suburb of Linwood.

People in centre of the city should stay indoors, police said. All Christchurch schools and council buildings have been placed into lockdown.

Police did not immediately comment on whether the incident took place in the mosque or nearby. There is no official confirmation on casualties.

Media said shots had been fired near a mosque and a witness told broadcaster One News that he had seen three people lying on the ground, bleeding outside the building.

Radio New Zealand quoted a witness inside the mosque saying he heard shots fired and at least four people were lying on the ground and "there was blood everywhere".

"Horrified to hear of Christchurch mosque shootings. There is never a justification for that sort of hatred," said Amy Adams, a member of parliament from Christchurch.

The Bangladesh cricket team is in Christchurch to play New Zealand in a third cricket test starting on Saturday.

Mario Villavarayen, strength and conditioning coach of the Bangladesh cricket team said the team was close to where the shooting occurred, but was safe.

He said the players were shaken up but fine.