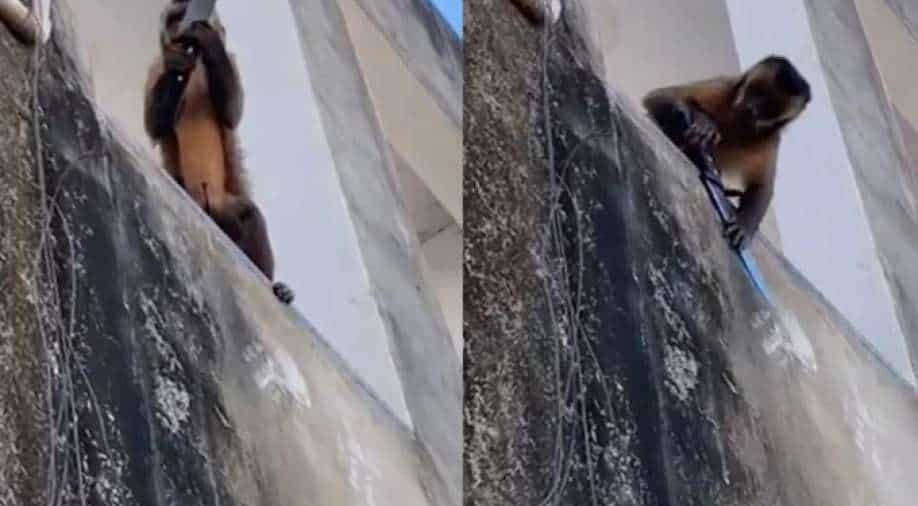 The monkey was seen sharpening the knife, which is the same size as him, against a brick wall and then waving the blade around as if threatening locals

A monkey wielding a knife has terrorised an entire city in Brazil. A video has surfaced online, showing the primate brandishing a large kitchen knife running amuck in Corrente in northern-eastern Piaui state, which is near a large national park.

A resident recorded the whole incident on his phone, in which the monkey was seen sharpening the knife against a brick wall. The mischievous simian was seen holding the weapon tightly which is nearly the same size as him. The primate then waves the blade around as if threatening passers-by, reports Metro newspaper.

Local resident Alessandro Guerra – who shot the video – said that the monkey has been running riot in the town for a week.

“It lets people touch it, it even goes to their houses and many have already taken it by the hand,” He told local media.

“It’s been making a mess. It’s already damaged roofs and this week it showed up with this knife,” he added.

Guerra said that while there are people who have faced a lot of problems due to the presence of the primate, others find it funny.

“Those who are suffering from the mess are worried, as they can’t leave their doors or windows open. Others are finding it funny, it’s become a meme,” he added.

The city’s environment department said that it was aware of the incident, but it did not have the facilities to seize the animal.

Environmental police, whose nearest detachment is 403 miles (648.5 kilometres) away in Teresina, have also been contacted.

Desperate locals then approached the Brazilian Institute of the Environment and Renewable Natural Resources, who assured to look into the case.