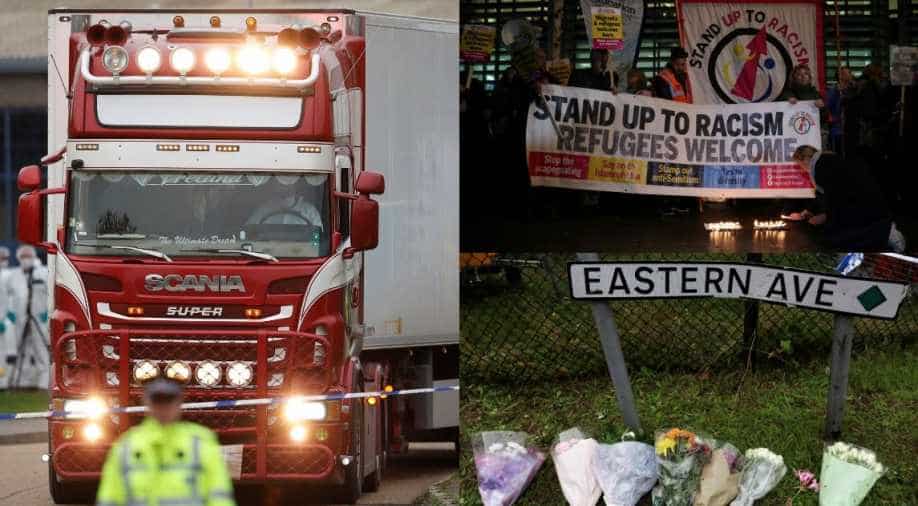 'At this time, we believe the victims are Vietnamese nationals, and we are in contact with the Vietnamese government,' Essex Police chief Tim Smith said in a statement.

The 39 migrants found dead in a refrigerated truck near London are believed to be Vietnamese, police said Friday as they renewed their appeal for two men to help with the investigation.

"At this time, we believe the victims are Vietnamese nationals, and we are in contact with the Vietnamese government," Essex Police chief Tim Smith said in a statement.

"We are in direct contact with a number of families in Vietnam and the UK, and we believe we have identified families for some of the victims whose journey ended in tragedy on our shores," he said.

But he added that the "confirmatory evidence" required to name the victims had not yet been obtained.

Police have also said they wanted to speak to Ronan and Christopher Hughes, two brothers in the haulage business from Northern Ireland, in connection with the discovery of the bodies at an industrial estate last month.

Police had initially said the victims were believed to be Chinese nationals.

Detective Chief Inspector Dan Stoten said on a visit to Belfast that officers had already spoken to Ronan Hughes by telephone but needed to talk to him again in person.

The victims -- eight women and 31 men -- were found in a truck that entered Britain on a ferry from Belgium.

Post-mortem examinations are being carried out and no formal cause of death has been released.

A multinational police investigation is now underway in a case that has shocked Britain and renewed debates about ways to stop human trafficking.

In Vietnam, police on Friday announced the arrest of two people for trafficking in connection with the deaths.

The pair were accused of "organising and brokering for other people to go abroad and stay abroad illegally", a Vietnamese police statement said.

In Dublin, a 23-year-old man from Northern Ireland appeared at Ireland's High Court for the start of extradition proceedings to bring him to Britain.

He is charged with 39 offences of manslaughter, as well as immigration and human trafficking offences.

The 25-year-old driver of the refrigerated lorry, also from Northern Ireland, has been charged with manslaughter, money laundering and conspiracy to assist unlawful immigration.