Manila casino attack not by IS fighters, but lone gunman: Police 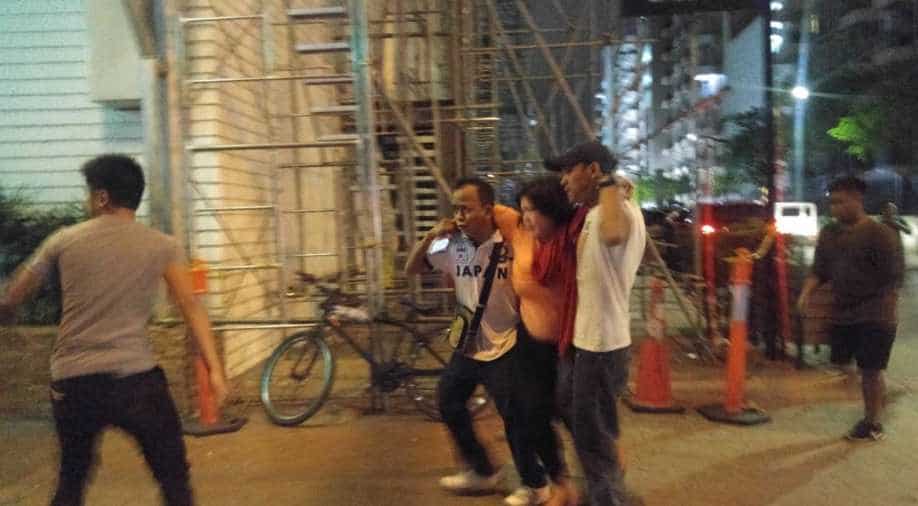 Police, fire trucks and a SWAT team were in the area. Photograph:( Twitter )

A gunman was on the loose at a casino complex in the Philippine capital on Friday after firing an assault rifle in a gambling room, but nobody has been reported shot or taken hostage, the national police chief said.

People ran screaming out of Resorts World Manila, which is across a road from one of the main terminals of the Philippines' international airport, after the man fired what police chief Ronald dela Rosa said was an M4 assault rifle.

"There hasn't been anyone shot... there are only injuries from people who tried to escape in a stampede or from smoke," Dela Rosa said on DZMM radio.

Dela Rosa said he could not say if it was a terrorist attack, but emphasised the gunman did not shoot anyone and there had been no reports of hostages being taken.

It was initially believed that a group of militants, belived to be associated with Islamic State, had stormed the casino and opened fire.

Local media reports had suggested that the fighters belonged to Indonesia, Chechnya (Russia), Malaysia and Yemen.

Islamic State, who have escalated their street fights against the country's army, had also claimed responsibility for the attack.

IS said "lonewolf soldiers" from its group carried out the attack, according to the SITE Intelligence Group that monitors terrorist organisations.

But dela Rosa said: "We cannot attribute this to terrorism."

He said it may have just have been an attempted robbery, pointing out the gunman tried to steal the gambling chips.

The gunman, who had not been found for close to five hours after the shooting, has been killed, police said.

Dela Rosa said the man, who appeared to be acting alone, walked into one of the gambling rooms and fired the rifle at a large television screen, then poured gasoline onto a gambling table and set it alight.

He said the man then fired again at a stock room containing gambling chips and filled a backpack with them.

The man left the room and went upstairs to a hotel section of the complex, according to dela Rosa.

"We have cleared the rooms (on the floor of the hotel the gunman was last seen) but we don't see where he is," dela Rosa said.

Windows were smashed on the second floor of the complex just before daylight broke, but it was unclear why and by nearly 6:00 am police did not report any breakthrough in the hunt for the gunman.

People inside the casino recounted feelings of terror when the shooting occurred.

"I was about to return to the second floor from my break when I saw people running. Some hotel guests said someone yelled 'ISIS'," Maricel Navaro, an employee of Resorts World, told DZMM radio.

ISIS is another acronym for the Islamic State group.

"Guests were screaming. We went to the basement locker room and hid there. People were screaming, guests and employees were in panic," Navaro said.

"When we smelled smoke, we decided to go for the exit in the carpark. That's where we got out. Before we exited, we heard two gunshots and there was thick smoke on the ground floor."

Outside the complex, relatives of people caught inside waited to hear news of their loved ones.

"Our daughter called us past midnight saying she was in the VIP section of the casino and there was smoke and they were suffocating," Gil Yongco, 42, told AFP.

"We are very worried about her. We haven't heard from her and she is not on the list of casualties. We want to know if she is still alive."

Philippine President Rodrigo Duterte imposed martial law last week across the southern region of Mindanao to crush what he said was a rising threat of Islamic State there.

He declared martial law shortly after militants went on a rampage through the southern city of Marawi, which is about 800 kilometres (500 miles) south of Manila.

Security forces are still battling the militants in Marawi, and the clashes there have left at least 171 people dead.

Duterte said last week he may need to declare martial law across the rest of the country if the terrorism threat spread.

A Muslim separatist rebellion in the southern Philippines has killed more than 120,000 people since the 1970s.

The main Muslim rebel groups have signed accords with the government aimed at forging lasting peace, giving up their separatist ambitions in return for autonomy.

However a range of hardline militants groups have rejected the peace process and in recent years have sought to unite behind IS.