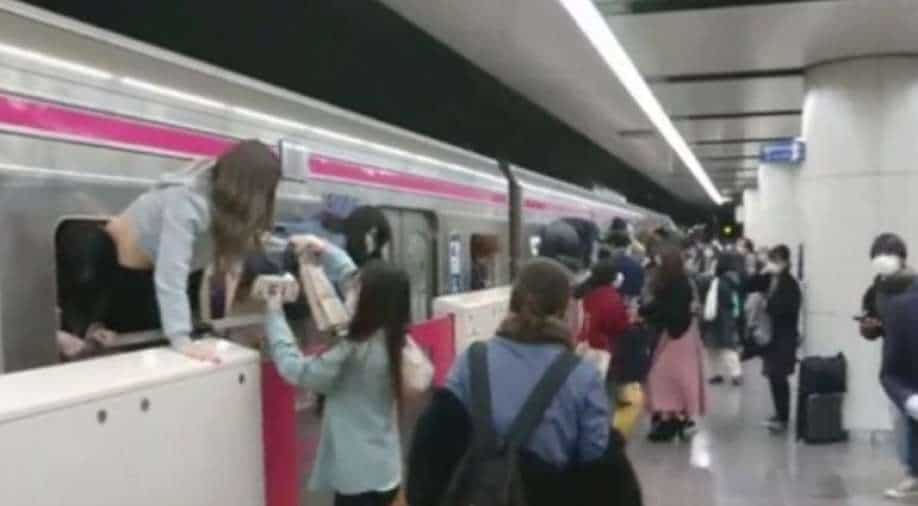 Video evidence posted on Twitter showed several people trying to climb out of the Keio Line train at a station to escape the ongoing attack. It is believed that nearly 15 people have been injured in the attack, of which one is in critical care

A knife and fire attack that took place on a train in Tokyo on Sunday has injured at least nine people. Local police officers have now detained one man in relation to this incident.

Local media organisations, including NHK, have claimed that the main who has been detained is responsible for starting a fire on the train. It is being reported that the man spread a liquid around the train carriage to start the fire. However, officials have not confirmed it yet.

The attack took place around 8 pm when the country was wrapping up its polling of the general elections.

Video evidence posted on Twitter showed several people trying to climb out of the Keio Line train at a station to escape the ongoing attack. It is believed that nearly 15 people have been injured in the attack, of which one is in critical care, but officials have only claimed of nine injured people.

Scary train incident in Tokyo. I believe it’s on the Keio line. I hope everyone is ok. It’s 9 p.m. on Sunday night. Hope the train wasn’t too busy. pic.twitter.com/4i9ADp5PVV

"I thought it was a Halloween stunt," one witness told the Yomiuri newspaper, recalling the moment he saw other passengers running in a panic towards his train car. "Then, I saw a man walking this way, slowly waving a long knife." He said there was blood on the knife.

This is not the first time such a violent attack has taken place in Japan in the recent years. Although such incidents are rare in Japan, nine people were injured in a similar stabbing attack on a commuter train in the capital city, Tokyo. The suspect, in that case, had self-surrendered a little later.

Back in 2019, too, a man had shot dead two people including a young school girl and had also injured dozen others in a mass shooting. This incident had rocked the country as majority of the targets were school children who were waiting for their school busy to arrive.

Even in 2018, a man was accused of stabbing one person to death and injuring two others in a bullet train.