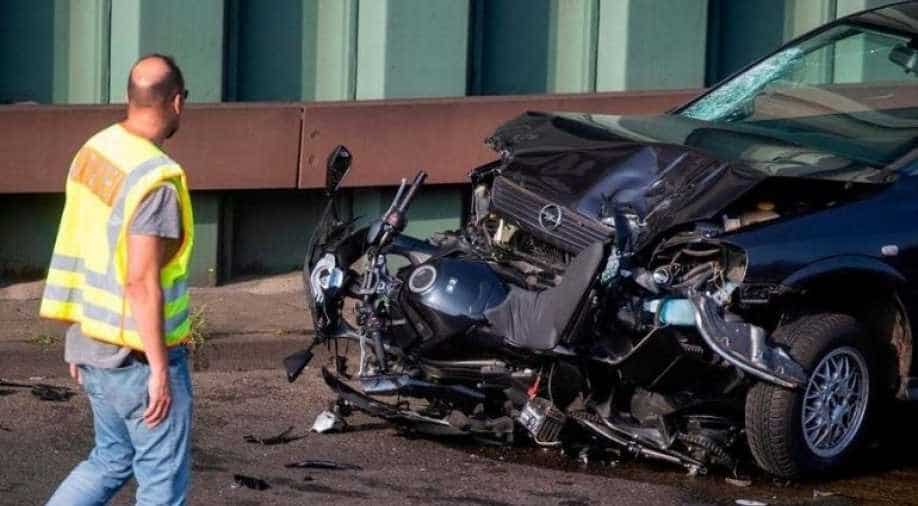 Police officer walks past battered motorcycle and car after a series of crashes on the Berlin motorway Photograph:( AFP )

Berlin police said the man caused three accidents on the Autobahn 100 in the city's Tempelhof-Schoeneberg district before claiming that a box in his car contained a 'dangerous object'.

A man has caused a series of motorway accidents in Berlin, injuring six people including three seriously in what German prosecutors Wednesday described as an Islamist act.

The man appears to have had an "Islamist motivation according to our current knowledge", prosecutors told AFP.

Local media reported that the man was a 30-year-old Iraqi who had shouted "Allahu Akbar" (God is Greatest) when getting out of his car after hitting several vehicles around 6:30 pm on Tuesday.

Berlin police said the man caused three accidents on the Autobahn 100 in the city's Tempelhof-Schoeneberg district before claiming that a box in his car contained a "dangerous object".

However, when police opened the box using high-pressure water jets it was found to contain nothing but tools.

The driver was arrested and the motorway closed for several hours, causing significant travel disruption.

"Nobody come any closer or you will all die," the Bild daily quoted the suspect as saying after he stopped his car and placed the metal box on the roof of his vehicle, a black Opel Astra.

German media reported that a motorcycle driver was among those injured.

People with ties to Islamic extremism have committed several violent attacks in Germany in recent years.

The worst was a ramming attack at a Berlin Christmas market in December 2016 that killed 12. The Tunisian attacker, a failed asylum seeker, was a supporter of the Islamic State (IS) jihadist group.

More recently, an Islamist and his wife were convicted of planning a biological bomb attack in Germany in 2018 with the deadly poison ricin.

The pair had ordered castor seeds, explosives and metal ball bearings on the internet to build the toxic bomb.

The man was in March sentenced to 10 years in prison while his wife received an eight-year sentence in June.

Since 2013, the number of Islamists considered dangerous in Germany has increased fivefold to 680, according to security services.

German Chancellor Angela Merkel has often been accused, particularly by the far right, of having contributed to the Islamist threat by opening the country's borders to hundreds of thousands of migrants in 2015.