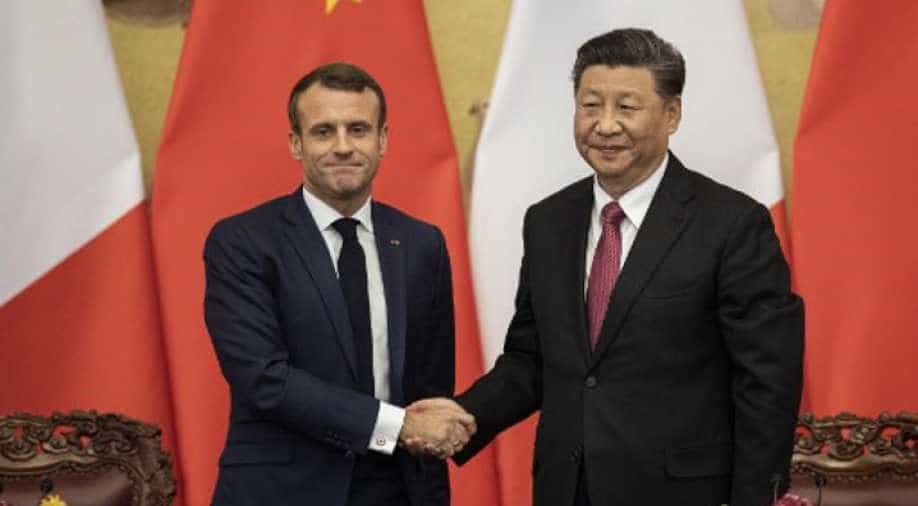 Macron, Xi meet at the Great Hall of the People in Beijing Photograph:( AFP )

The US had presented its withdrawal letter to the United Nations on Monday which was negotiated by the Obama administration.

As the Trump administration on Monday began the process of formally pulling out of the Paris climate agreement, French President Emmanuel Macron and Chinese President Xi Jinping reaffirmed their strong support for the global accord.

"Both sides attach high importance to measures responding to climate change and protection of ecological diversity, and we agree to cooperate over next year's 15th Biodiversity Convention on Biodiversity held in Kunming to push forth the Paris Climate Accords in response to climate change," Chinese President Xi Jinping said during his meeting with President Macron in Beijing.

Xi added that the international community should "jointly protect our homeland planet Earth", adding "we are against the attempt to place national interests above the common interests of humanity".

Macron too a swipe at the US, decalaring: "I deplore the choices made by some others, but I want to see them as marginal choices, because when China, the European Union, Russia, which ratified the Paris agreements a few weeks ago, engage with firmness, the isolated choice of one or another (country) is not enough to change the course of the world, it will only lead to them being edged out."

Both leaders also issued a joint statement reaffirming their committment towards the climate agreement. In a joint statement, Xi and Macron reaffirmed "their firm support for the Paris accord which they consider as an irreversible process and a compass for strong action on climate".

Xi and Macron expressed determination to improve international cooperation to "ensure a complete and efficient implementation of the Paris accord" while pledgeing to restore almost a third of degraded land as well as eliminating fossil fuel subsidies in the medium term.

The US had presented its withdrawal letter to the United Nations on Monday which was negotiated by the Obama administration.