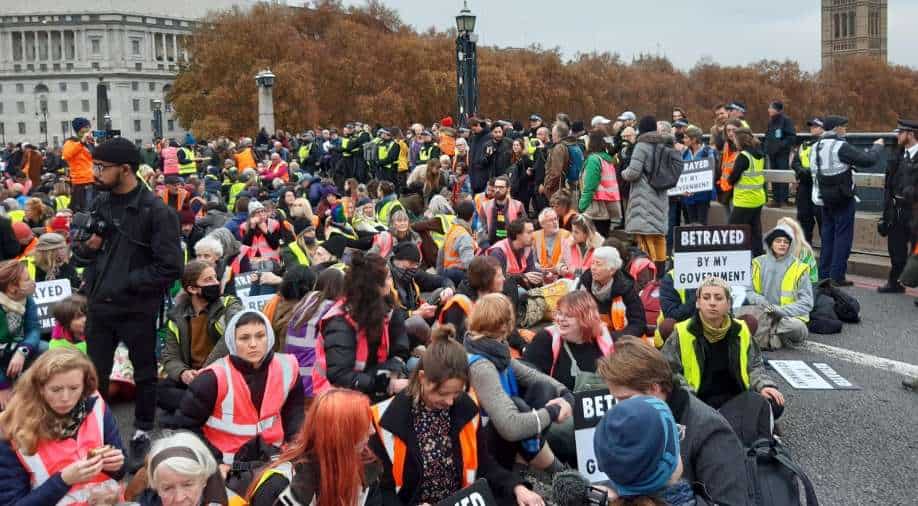 Thirty climate activists were arrested in London after they sat on Lambeth bridge and managed to block the traffic for several hours. The proteseors were expressing their support for nine Insulate Britain campaigners who were jailed this week.

The group demands that the government should improve the energy efficiency of heating in people's homes by 2030. It has also targeted London's financial district.

Public order act conditions were imposed on the protest as up to 250 people were seen marching from the Royal Courts of Justice.

Protesters blocking off Lambeth bridge, so far, police are only observing. pic.twitter.com/rozv6U40yB

The demonstrators told the crowd the jailed activists were "political prisoners" and will not be the last to be locked up.

Gabriella Ditton, a protestor at Lambeth Bridge said that she believed that even she would end up in jail for participating in the protests. She has been arrested six times with the campaign group.

Sky News quoted her saying, "I expect to go to prison at some point for at least six months because I am not going to be apologetic about this."

"I have known for a couple of years that the only thing that is going to serve us is civil resistance. I have faith in people coming together. Solutions to this crisis exist, we just need the political will to do it."

These are not the first protests to be witnessed in the region. Earlier this month, various demonstrators wearing Guy Fawkes-style masks gathered at Trafalgar Square as they burned an effigy of Prime Minister Boris Johnson. The protestors even moved to Parliament Square where they threw fireworks towards police.

The members of the movement, known as the Million Mask March, were holding signs against coronavirus restrictions.

Also, before this, there have been reports of nearly sixty supporters of a group Insulate Britain sitting on the ground holding banners as they blocked two roads around Parliament.

The protests angered many people as it led to miles-long traffic congestion.