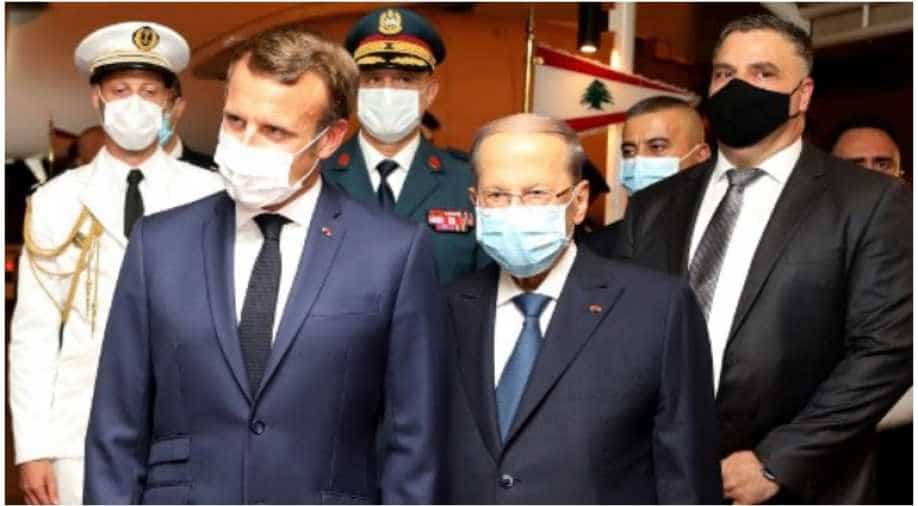 Macron is in Beirut for a second time since an August 4 explosion there which killed more than 180 people, laid waste to entire city districts and fuelled popular rage against the country's political elite.

Macron is in Beirut for a second time since an August 4 explosion there which killed more than 180 people, laid waste to entire city districts and fuelled popular rage against the country's political elite.

He attended muted celebrations marking the centenary of Greater Lebanon, shortly after political leaders settled on a new prime minister, Mustapha Adib, to form a cabinet and lead the country out of political turmoil and an economic crisis that was already crippling the country before the portside blast.

"What all political parties without exception have committed to this evening right here, is that the formation of this government will not take more than 15 days," he said.

Macron had set himself an ambitious goal for his return visit: to push for deep change, but without being seen as meddling in the former French mandate.

"This is the last chance for the Lebanese system," he warned earlier.

Macron spoke to the press after meeting top Lebanese politicians, while clashes erupted in central Beirut between security forces and protesters rejecting the new prime minister.

One held a poster aloft urging Macron: "Do not cooperate with the corrupt and criminal."

The French leader arrived Monday, just hours after Adib, a little-known 48-year-old academic and former ambassador to Germany, was designated to form a government.

Macron said it was not his place to "approve" the designation of Adib, whom he met late Monday and again on Tuesday.

The premier designate "has to be given all the tools to succeed... so he can implement reforms" long demanded by the international community, Macron said.

The Beirut explosion compounded Lebanon's worst economic crisis since the war, which has reached the point where the UN has warned that more than half of the population risk food shortages by the end of the year.

On August 9, international donors pledged over $300 million in emergency aid, during a video conference jointly organised by France and the United Nations.

Macron said he was ready to host a second Lebanon aid conference in the second half of October.

He added he had also invited the president, the prime minister and parliament speaker to a second political conference at the same time.

Macron had kicked off his trip not by visiting political leaders, but by spending more than an hour Monday with singing legend Fairuz, who at 85 is a rare unifying figure in Lebanon.

On Tuesday, Macron attended a series of events to mark 100 years since French mandate authorities proclaimed the creation of Greater Lebanon.

In the Jaj forest northeast of Beirut, he planted a cedar tree, Lebanon's national symbol, to express "confidence in the future of the country," his office said.

Macron also returned for a second visit to Beirut port, ground zero of the colossal blast.

Some on social media criticised the aerial manoeuvre, saying it could trigger traumatic memories among people who experienced the port blast and the 1975-1990 civil war.

Hezbollah has 'popular base'

Activists have blamed the country's entrenched political class for the August 4 explosion of hundreds of tonnes of ammonium nitrate after languishing unsafe in the port for years.

They have rejected the choice of Adib as premier, over being too close to established political circles.

On Tuesday, hundreds of protesters called for the proclamation of a secular state, to replace the multi-confessional country's sectarian power sharing system.

Clashes erupted in the evening, sparking condemnation from activists who denounced the police for beating protesters and alleged that French tear gas had been used.

Representatives of the powerful Shiite Muslim Hezbollah movement, designated by the US as a terrorist group, were among those who met Macron Tuesday.

Macron said Hezbollah, which is part of a bloc that has a majority in parliament, "is probably in parliament because of intimidation but also because other forces have failed to run the country well," but it also had a "popular base".

The issue of the disarmement of the group's military would eventually need to be broached, he said, though not immediately.

"This is exactly the discussion we had an hour ago... It should not be a taboo," he said.