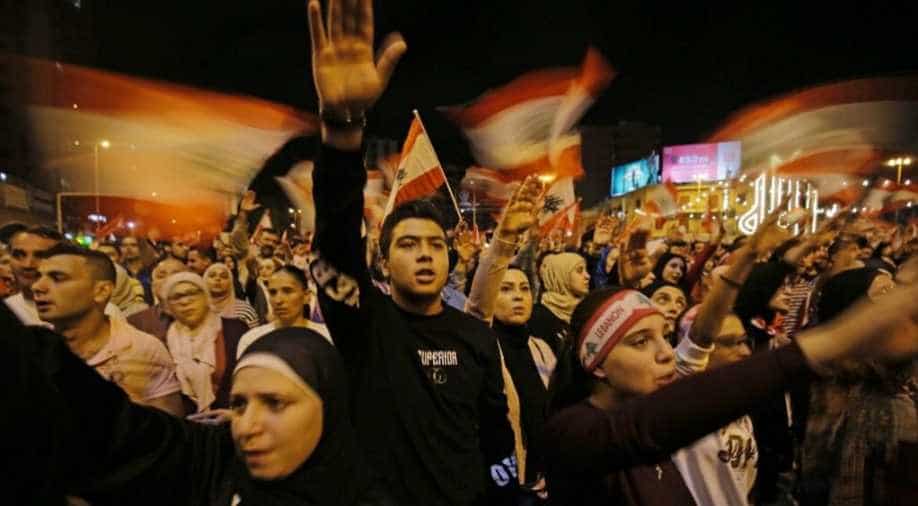 Lebanese protesters wave flags and shout slogans during an anti-government demonstration at al-Nour Square in the northern port city of Tripoli. Photograph:( AFP )

Despite its reputation for conservatism, impoverished Tripoli has emerged as a festive nerve centre of anti-graft demonstrations across Lebanon since October 17.

Thousands of Lebanese flocked together in Tripoli Saturday, an AFP reporter said, to keep a protest movement alive in a northern city dubbed "the bride of the revolution".

Despite its reputation for conservatism, impoverished Tripoli has emerged as a festive nerve centre of anti-graft demonstrations across Lebanon since October 17.

The movement has lost momentum in the capital since the government resigned this week, but in the Sunni-majority city of Tripoli late Saturday it was still going strong.

In the main square, protesters waved Lebanese flags and held aloft mobile phones as torches, before bellowing out the national anthem in unison, the reporter said.

"Everyone means everyone," one poster read, reiterating a common slogan calling for all political leaders from across the sectarian spectrum to step down.

Many people had journeyed from other parts of the country to join in.

Ragheed Chehayeb, 38, said he had driven in from the central town of Aley.

"I came to Tripoli to stand by their side because they're the only ones continuing the revolution," he said.

Leila Fadl, 50, said she had travelled from the Shiite town of Nabatiyeh south of Beirut to Tripoli to show her support.

"We feel the demands are the same, the suffering is the same," she said.

In Tripoli, more than half live at or below the poverty line and 26 per cent suffer extreme poverty, a UN study found in 2015.

On Tuesday embattled Prime Minister Saad Hariri announced his cabinet would step down.

But it is still unclear what a new government would look like and if it would meet protesters' demands that it include independent experts.

Roads and banks have reopened after nearly two weeks of nationwide paralysis.

Fahmy Karame, 49, called for a "rapid solution to the economic crisis".

"We're waiting for a government of technocrats," he said.

In the Lebanese capital, hundreds protested on Saturday evening after a day of rain.

"Down with the rule of the central bank," they shouted at the top of their lungs, clapping their hands near the institution's headquarters.

Economic growth in Lebanon has stalled in recent years in the wake of repeated political crises, compounded by an eight-year civil war in neighbouring Syria.