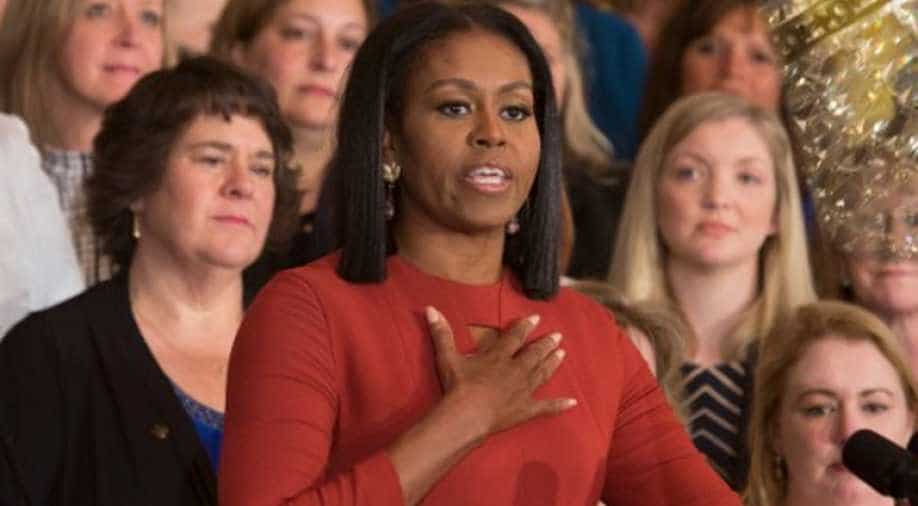 Michelle Obama gives her final remarks as US First Lady at the 2017 School Counselor of the Year event at the White House. Photograph:( AFP )

First lady Michelle Obama made an impassioned case for embracing diversity and welcoming all religious groups on Friday in a not-so-veiled message to her husband's successor two weeks ahead of Inauguration Day.

In what was billed as her last formal speech before President Barack Obama leaves office, the first lady said at an event honouring high school counsellors that the United States belonged to people from all backgrounds and walks of life.

"Our glorious diversity - our diversities of faiths and colours and creeds - that is not a threat to who we are, it makes us who we are," she said.

The remarks were reminiscent of her vigorous campaign speeches in favour of Democrat Hillary Clinton during the 2016 election. President-elect Donald Trump has proposed building a wall along the border of Mexico and temporarily banning Muslims from entering the country.

"If you or your parents are immigrants, know that you are part of a proud American tradition: the infusion of new cultures, talents and ideas, generation after generation, that has made us the greatest country on earth," Mrs. Obama said.

"If you are a person of faith, know that religious diversity is a great American tradition, too ... And whether you are Muslim, Christian, Jewish, Hindu, Sikh - these religions are teaching our young people about justice and compassion and honesty."

Mrs. Obama gave a series of high-profile speeches at campaign events for Clinton last year and made clear her disapproval of Trump for questioning President Obama's citizenship and for the New York businessman's treatment of women after a recording was released in which he bragged about groping women.

Trump was a leader of the so-called birther movement that questioned whether PresidentObama, who was born in Hawaii, had been born in the United States.

Mrs. Obama has kept a lower public profile since the election.

Choking up on Friday, she said being first lady had been the greatest honour of her life.

"So that's my final message to young people as first lady. It is simple. I want our young people to know that they matter, that they belong," she said. "Lead by example with hope, never fear. And know that I will be with you, rooting for you and working to support you for the rest of my life."