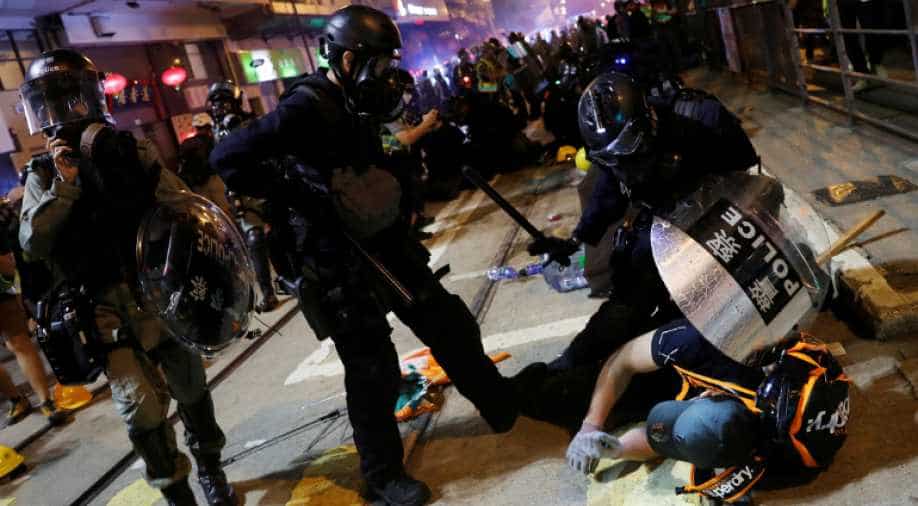 Riot police detains a demonstrator during a protest against police violence in Hong Kong, China. Photograph:(Reuters)
Follow Us

A bipartisan group of US lawmakers on Friday urged the Trump Administration to suspend future sales of munitions and crowd-control equipment to Hong Kong police which has been accused of using excessive force against anti-government protesters.

A Hong Kong democracy activist, Joshua Wong, this week tweeted pictures of teargas shells and rubber bullets he said were used by police against protesters.

Representatives Christopher Smith and James McGovern, chairs of a congressional human rights commission, made their request in a letter to Secretary of State Mike Pompeo and Commerce Secretary Wilbur Ross.

"We ask that you suspend future sales of munitions and crowd and riot control equipment to the Hong Kong Police Force and publicly announce that the US will not contribute to the internal repression of peaceful protest in Hong Kong," they wrote.

They also urged the secretaries to push back "against the Hong Kong and Chinese governments` efforts to characterize the demonstrations as `riots` and to blame the US for political instability which they alone created."

The State Department and the Commerce Department did not immediately respond to requests for comment.

"All these weapons are imported from the United States. Given the innumerable proof of police brutality in recent protests, all countries should call a halt to the sale of arms to the notorious Hong Kong Police," Wong said on Twitter.

Thousands of civil servants joined in the anti-government protests in Hong Kong on Friday for the first time since they started two months ago, defying a warning from the authorities to remain politically neutral.

Protests against a proposed bill that would allow people to be extradited to stand trial in mainland China have grown increasingly violent, with police accused of excessive use of force and failing to protect protesters from suspected gang attacks.

The human rights commission is composed of more than 40 members of the US House of Representatives. Smith is Republican and McGovern a Democrat.