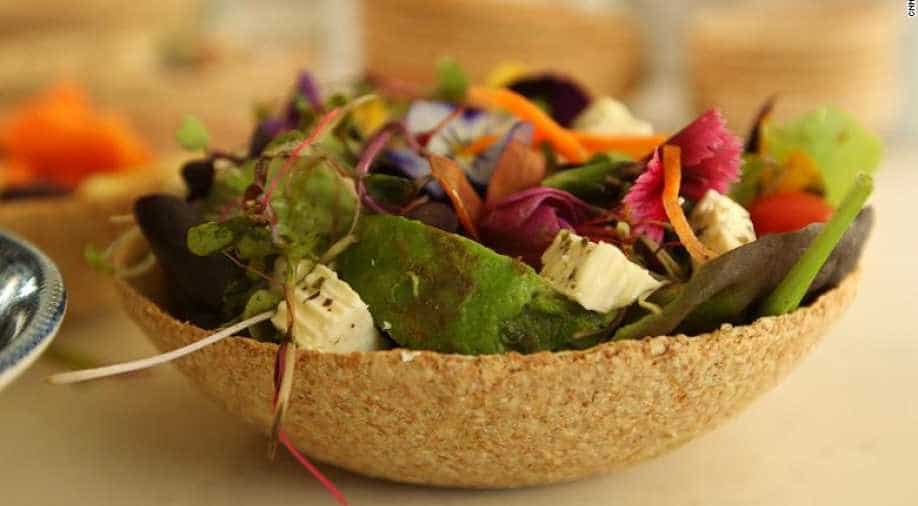 Consumable bowls made up of wheat (image courtesy: munch bowls) Photograph:( Others )

A South African startup called Munch Bowls has come up with a tasty solution to cut down the plastic dishware.

Packages used for eatables act as a major pollutant for water bodies as they take centuries to decompose.

A South African startup called Munch Bowls has come up with a tasty solution to cut down the plastic dishware.

The company claims to have created a biodegradable bowl which is made up of wheat and can be eaten as a part of our meal.

The bowls are vegan and can hold hot soup for up to five hours.

They have a shelf life of 15 months.

They can be used at all sorts of occasions such as picnics, parties and corporate events.

Bowls have been sold by the startup says to hotels and companies in the hospitality industry in South Africa, Belgium, Singapore and Dubai.

Although the bowls were originally handmade, the company has recently commissioned a machine that can produce 500 bowls per hour to keep up with the increasing demand.

Also see: How single-use plastic is killing the Earth

According to the United Nations, 300 million tons of plastic waste every year is produced every year which is nearly the equivalent to the weight of the entire human population but only 14 percent of that is recycled.

Munch Bowls was launched in 2014 by Georgina de Kock, an artist and entrepreneur.

She had worked at food markets and becoming dismayed at the amount of packaging used to serve street food.

"I was looking around and just noticing all the rubble that is created by us humans, and it really started irritating me," she said.

The bowls eliminate the waste generated from disposable containers, or the products and time needed to clean reusable ones, the company claims.

A price of a large bowl is approximately 33 cents.

Georgina argues that although this is more expensive than traditional plastic packaging, the bowls have nutritional value and can be integrated into a healthy diet.

Natural ingredients are used to make the bowls.

These include rooibos extract, a South African plant and natural preservative that is high in antioxidants.

The company is scaling up its operations.

By the end of 2020, the startup hopes to install six production lines and to make other products such as spoons, coffee cups and containers for meals on flights.

It was invented by Narayana Peespaty in 2011.

They make different types of spoons in a variety of flavours which do not dissolve or crack in hot water.