Search called off in Indonesian disaster, 3 dead in Java quake 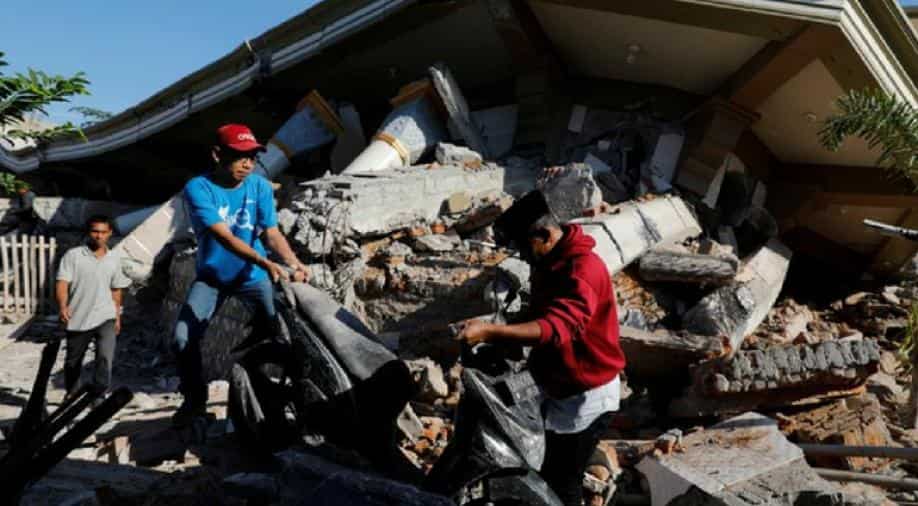 People push their motorcycle through the collapsed ruins of a mosque after an earthquake hit on Sunday. Photograph:( Reuters )

Some 10,000 rescuers toiled for a final day as relatives of the missing clung to their last hopes that the bodies of their loved ones could be found and given a proper burial.

Rescue workers scoured the rubble of devastated communities on Indonesia's Sulawesi island on Thursday, the last day of the search for victims of a 7.5 magnitude quake and tsunami that killed more than 2,000 people two weeks ago; the search has been called off.

If any reminder were needed of Indonesia's treacherous tectonics, a magnitude 6 quake struck off Indonesia's Java and Bali islands early on Thursday, killing three people in Java, damaging buildings and sparking panic.

The annual meetings of the International Monetary Fund and World Bank are being held this week on Bali and attended by more than 19,000 delegates and other guests, including ministers, central bank heads and some country leaders.

On the west coast of Sulawesi, hundreds of kilometres northeast of Bali, the official death toll from the earthquake and tsunami that struck the seaside city of Palu on Septeber 28 stood at 2,045.

Some 10,000 rescuers toiled for a final day as relatives of the missing clung to their last hopes that the bodies of their loved ones could be found and given a proper burial.

"I don't have any tears left, all I want is to find them," said Ahmad, 43, a farmer who was waiting near a pile of debris that used to be home in Palu's Balaroa neighbourhood.

His wife and two daughters are missing in the ruins.

Balaroa and other Palu neighbourhoods were devastated by liquefaction, which happens when a quake shakes soft, damp soil, turning it into a viscous, roiling liquid.

Ahmad's third daughter was badly injured and has been taken to the city of Makassar for treatment.

"She's all I have left. Everything I own, everyone else, is gone," he said.

No one knows how many people have yet to be found in Balaroa and other neighbourhoods but it could be as many as 5,000, the national disaster mitigation agency says.

Rescue teams are working with residents to try to identify where victims could be. However, it is mostly guesswork because of how far the ground moved during liquefaction.

"At the same time, if they ask us to help, if they're pointing 'please look here, my family is under here', of course, we can't say 'no', we have to dig. We want to help as many as we can."

The government has called off the search for bodies from Thursday, citing concern about the spread of disease, and is beginning to focus efforts on the next phase - rebuilding.

Data on the destruction is being compiled and mapping done to help determine where new houses should be built.

The danger of tsunamis near the coast in the north of the Palu and of soil liquefaction in the south are the major worries.

Areas hit by liquefaction will be turned into parks and sports fields and memorials.

Nofal Surya, 37, lost 15 members of his extended family in Balaroa. The bodies of only seven have been found.

"If I follow my heart, of course I want the search to keep going. But I think I have to accept that I may never find them," he said.