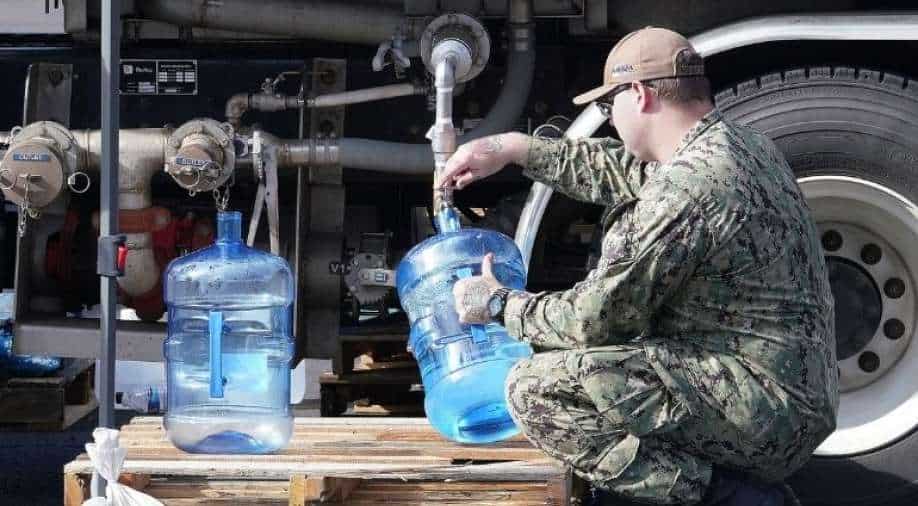 A member of Honolulu's military filling up a water container for the residents Photograph:( AFP )

People living in the area are experiencing its adverse effects in the form of nausea, vomiting, diarrhea, headaches, and skin-related problems

The Halawa shaft, which delivers 20 per cent of the water of Honolulu, has been shut down after the detection of the ''source of the contamination.''

The portable water system of a Navy well near Pearl Harbor found what is believed to be petroleum chemicals.

People living in the area are experiencing its adverse effects in the form of nausea, vomiting, diarrhea, headaches, and skin-related problems.

Also read | Why did Russia sell Alaska to the United States?

According to the Navy, ''The results of the Red Hill sample showed petroleum hydrocarbons roughly four to ten times below the Hawaii Department of Health Environmental Action Level (EAL).''

''The Navy had a separate test that confirmed vapors, which is another indication of petroleum hydrocarbons.''

''The Navy is developing a plan to restore the potable water system to EPA standards, identify how this contaminant got in the well, and fix the well,'' he added.

Also see | From the hottest month to biggest airlift: Here are the biggest records of 2021

The city's Board of Water Supply (BWS) Manager and Chief Engineer Ernest Lau said "We are deeply concerned that we were not notified immediately by the Navy regarding the shutdown of their Red Hill water source."

"We have data that shows when they stop pumping at Red Hill, water starts moving in the direction of our Halawa Shaft due to our pumping," Lau said.

In the latest update, the Navy said, ''The Commander, Navy Region Hawaii, has determined Temporary Lodging (TLA) is necessary for service members and their dependents, and civilians living in housing affected by the current water-related health or safety concerns.''