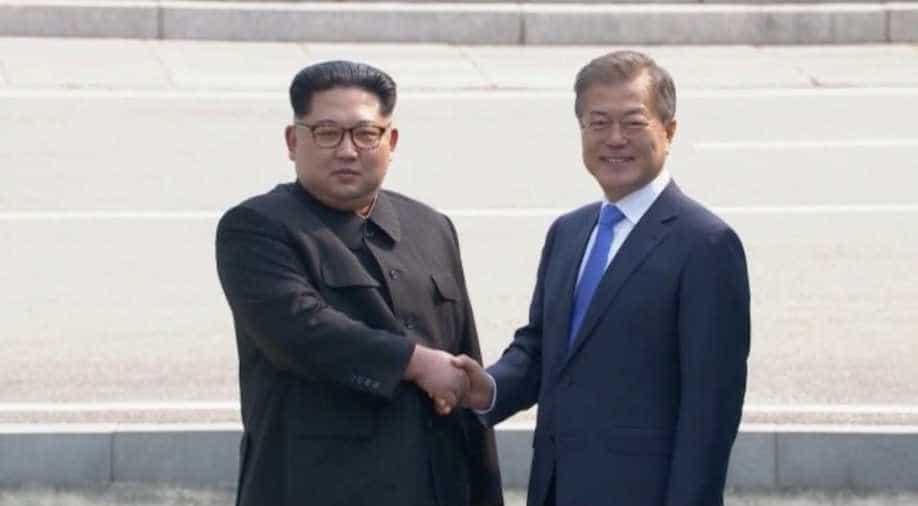 South Korean President Moon Jae-in arrived an at the Demilitarized Zone a short while ago. Moon and his North Korean counterpart Kim Jon-Un are geared up for a historic meeting, the first-ever summit between both the nations in more than a decade.

Smiling and holding hands, North Korean leader Kim Jong Un and South Korean President Moon Jae-in met at the heavily fortified demilitarised zone between the countries on Friday in the first summit for the two Koreas in over a decade.

Moon greeted Kim at the military demarcation line at 9:30 a.m. (0030 GMT), making Kim the first North Korean leader to set foot in the South since the 1950-53 Korean War.

Kim invited Moon to step briefly across the demarcation line into North Korea, before the two leaders crossed back into South Korea holding hands.

The two were handed flowers by a South Korean boy and girl, residents of a village situated in the demilitarised zone.

Walking on a red carpet rolled out for the two heads of state, the pair were met by a South Korean honour guard in historical costumes and playing traditional music.

The dialogue between the two Korean leaders is primarily expected to focus on the North's nuclear arsenal.

The Korea summit primarily aims to ease tensions on the Korean peninsula and was planned after North Korean leader's recently expressed willingness to put his nuclear program for negotiation after a year of nuclear and missile tests.

Moon is expected to focus on North Korea's nuclear program. Kim Jon-Un's crossed the DMZ in a historic act which made him the first North Korean leader to step into the northern side after the Korean War ended 65 years ago.

Also read: Here's what Kim and Moon will feast on at the Korean Summit this week

The leaders of the two Koreas will seek to end their decades-long conflict and ease tensions over the North's nuclear weapons programme.

The two are expected to talk denuclearisation and exchanges between the Koreas and also will plant a memorial tree at the border truce village of Panmunjom as part of the first inter-Korean summit in more than a decade.

Friday's summit will set the stage for Kim to meet with US President Donald Trump in late May or early June, in what would be an unprecedented first encounter between sitting leaders of the two countries.

Scepticism has been rampant about whether Kim is ready to abandon the hard-earned nuclear arsenal his country has defended and developed for decades as what it says is a necessary deterrent against U.S. invasion.

The two neighbours expect to release a joint statement late on Friday - possibly called the Panmunjom Declaration - that could address denuclearisation and peace, and an improvement in relations, South Korean officials said.

Impoverished North Korea and the rich, democratic South are technically still at war because the Korean War ended in a truce, not a peace treaty.

The latest summit has particular significance not least because of its venue: the Demilitarised Zone, a 160-mile (260-km) long, 2.5-mile (4-km) wide strip of land created in the 1953 armistice to serve as a buffer between the South and North.

Both the Koreas have met only thrice.