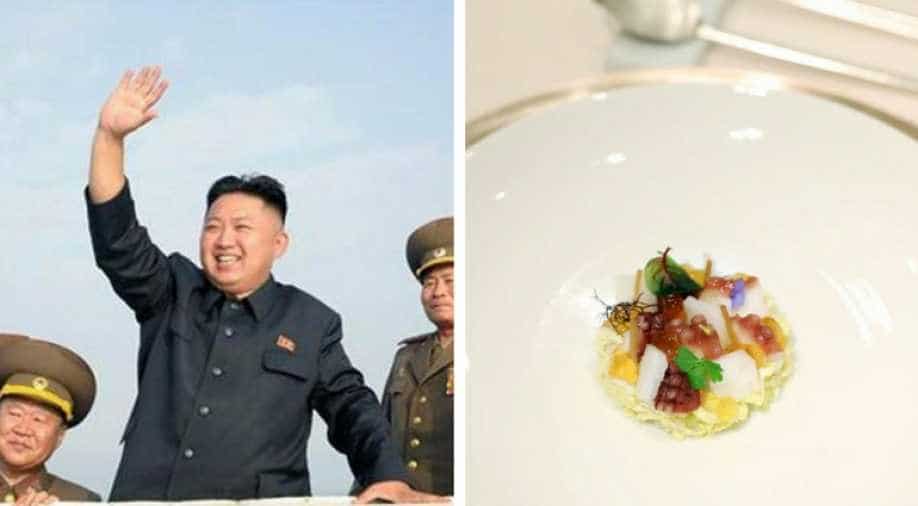 Kim Jong-un will cross the demilitarised zone between North Korea and South Korea on Friday for the highest level meeting held to date with South’s President Moon Jae-in.

The two states are set to discuss the North’s nuclear arsenal which its leader has vowed to dismantle.

The leader will be served Swiss rösti with a Korean style in a specially curated banquet menu, presidential spokesman Kim Eui-kyeom said in a briefing Tuesday.

North Korea has never confirmed Kim Jong Un was educated in Switzerland, but former classmates and teachers have said they spent time with him there. Swiss newspapers have also reported Kim went to school under a pseudonym in Switzerland.

Kim and Moon can wash down their meal with a fragrant wine made from azaleas.

Also on their table will be a distilled liquor called munbaeju that is 40 per cent alcohol by volume and which originated in the North, but is now traditionally made in the South.

Here's what in store: The octopus is from Tongyeong at the southern tip of the peninsula which will be served in a bed of lettuce including other vegetables. The fried potato dish was chosen as an homage to Kim's childhood spent in Switzerland, the Blue House said in announcing the menu for Friday's welcome dinner. Baked John Dory, a dish made from the flat sea fish, will be served as a nod to Moon's younger days in the South Korean port city of Busan. The dish originated from Gageo Island, Shinan county and includes dumplings stuffed with crocker fish and cucumber served in a bed of broth. Another item on the menu will be Pyongyang-style cold noodles, or naengmyeon, served in a chilled meat broth.

Okryu Gwan is North Korea's best-known restaurant famous for the dish, and has branches in China as well.

The cold noodles will be made by the head chef at Okryu Gwan, who will travel to the truce border village of Panmunjom where the two leaders will meet on Friday, the Blue House spokesman said.